What are you working on??

Discuss the society, wargaming, and other topics of interest
Post Reply
35 posts

What are you working on??

Bit quiet here, so we`ll try the usual question - what are you working on??

I`ve spent the last few days head-swapping, assembling and generally messing about, this morning I undercoated everything and so they are now ready for painting.

About a weeks worth of painting I should guess

Just finishing up a modified Airfix LCM conversion into a 'ferry'......stuck a bigger cabin on the back and civvy colours........for African games.
Dug out some Enfilade figures that are destined to be more African govt troops......mix of weapons and gear but well equipped compared to other factions!
Also finished a batch of plastic figures as Syrian Army ( mixed bag of Esci/Caesar/Orion odds n ends), opposition for my rebels and Daesh mo'fos. Have some of the latest Caesar militia to base coat and prepare too........... 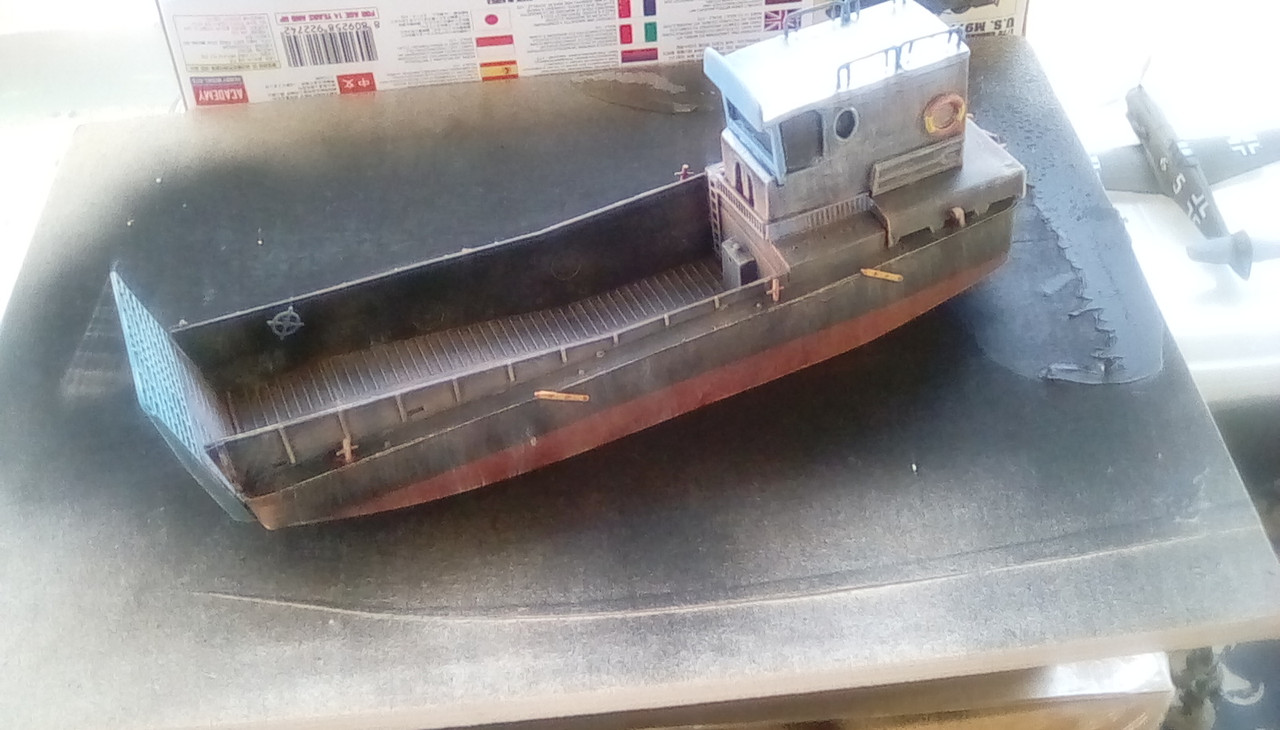 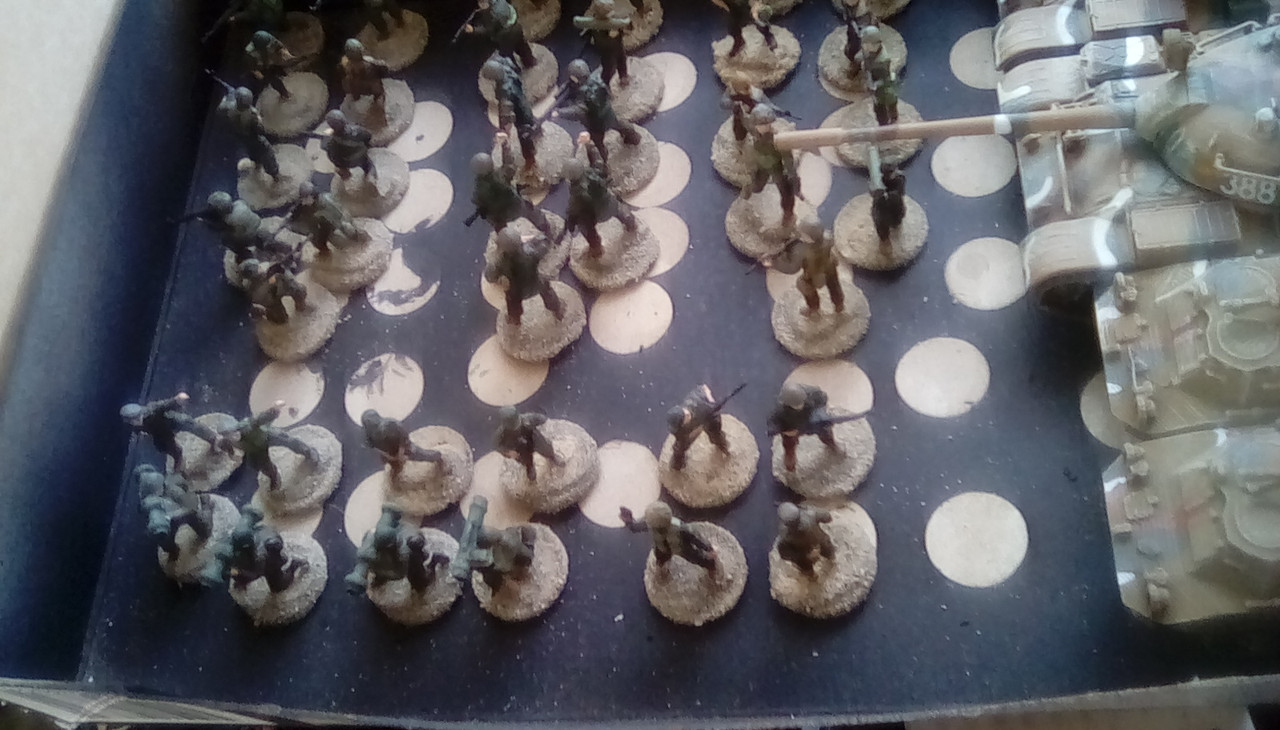 We are just back from a wonderful long weekend with the grandchildren in Legoland. So I am "assisting" the construction of a whole range of Star Wars, Friends, Ninjago etc etc

yes indeed, with the apc, scania & volvo trucks now in resin lots to make for it.
sandsmodelshop.com
Top

Spent most of this past year working on 1/2400 WW2 ship miniatures. Here are some recently completed items:

An assortment of Italian tankers, including the small naval tankers Marte and Prometeo, and merchant tankers Tampico, Luisiano, and Alcione C. All are scratchbuilt from plastic card. Alcione C. had a rather interesting history, as she was originally built in 1915 as HMS M.18, a Royal Navy 9.2-inch gun monitor. One of a batch of 8 surplus monitors bought up in 1920-21 and converted into shallow draft oil tankers for service with N.V. Curacaosche Scheepvaart Maatschappij (a Shell subsidiary) on Lake Maracaibo, renamed Anam. Unfortunately, the monitor conversions were really too small for CSM's needs, and by the mid-to-late 1920's they had been sold or discarded, replaced by new purpose-built tankers. Anam was eventually passed on to Italian owners in 1931, and renamed Alcione C. She was sunk 14 April 1943 off the east coast of Corsica by HMS Taurus in a surface gun action. Taurus expended 54 rounds from her 4-inch gun in sinking the little coastal tanker and former monitor.

Italian resin merchant ships from Stephen Taylor's Bay Area Yards. 2 of the Adriatico type and 3 Poeti class motorships. Andrea Gritti at rear is painted in the overall intermediate grey scheme worn by some Italian merchants and naval vessels in spring 1941, while the rest are in various official camouflage patterns. I've added a few minor bits like ships boats and armament, but the models are otherwise stock.

More Italian merchant ships. San Marco (a former WW1 British Type C standard merchant) and Mercurio (a former WW1 US-built 'Laker' type standard merchant) are scratchbuilt, although Stephen Taylor now offers both ship types in resin. Somalia, Tripolitania, and Romolo Gessi (at rear) are all Stephen Taylor resin models. Romolo Gessi is one of the many WW1 British Type B standard merchant ships acquired by the Italians between the wars. Somalia and Tripolitania are likewise former British Type D standard merchants, although they (and another sister, Eritrea) were completely rebuilt as mixed passenger/cargo ships for colonial service after being bought by the Italians, and bore little resemblance to their original profile and appearance after conversion. I am using a couple of Stephen Taylor's generic coastal tramps to represent these ships after conversion, as the size and overall appearance are quite close. Romolo Gessi, Somalia, and Tripolitania all had the misfortune to be caught in Italian East African ports when Italy declared war, and Romolo Gessi and Tripolitania were both scuttled at Massawa in April 1941. Somalia was one of the very few Italian merchants in East Africa to escape the British blockade before the colonies fell. She broke out from Kisimayo on the night of 10/11 February 1941, in company of a number of other Italian merchants. Unlike most of them, she managed to evade the patrolling British cruisers and reach Diego Suarez in Vichy Madagascar . Unfortunately, her reprieve was only temporary, and she was still anchored in Diego Suarez when the British invasion force arrived the following year. She was scuttled there on 8 May 1942 to avoid capture.

Eight Dutch submarines of two classes, K.XIV - K.XVIII of the K.XIV class (built 1930-34), and K.XI - K.XIII of the K.XI class (built 1922-26), along with the former KPM motorship Janssens (1935, 2071 GRT), requisitioned by the Dutch Navy at the start of the war for use as a submarine depot ship in the East Indies. All are scratchbuilt from plastic card. I still need to build the old obsolescent boats K.VII - K.X and the new O.16, O.19, and O.20 to have the complete Dutch submarine force for the East Indies. The depot ship, Janssens, was also the means by which Dr. Wassell and his badly wounded sailors from USS Marblehead escaped Java and eventually reached Fremantle, Australia.

I am drawn towards small ships, so far i`ve resisted valiantly - you have NOT helped

Little ships......another slippery slope!
I started with just destroyers for Narvik 1940 ( after a very good article in MW years ago) and now have US and Japanese fleets as well as ships for the Graf Spee campaign and Arctic convoys........
"The man who has no sense of history, is like a man who has no ears or eyes"

I have another one half written, and have a few ideas floating about in my head...so no modelling or painting from me, just writing