We have need to mark dug in positions, as our games get more "interesing" the need to mark positions abandoned and occupied better, simpoly remembering is beginning to spoil tha game and slow it down, a criminal offence if ever there was one in wargaming. So here are my 1/144 scale dug in markers. They are in a range of finishes, me I like the mostkly flock ones, easy to overloog so adds to the fog of war. Which do you like and why?

Note the height of the markers is restricted to prevent confusion with masking terrain markers which are similar in size but have a different function, sot of mini folds in the ground. Plus not too much loss as most of our troops are prone anyway, I am no lover of standing figures in general, though | do have a few, If only to remind me why I don't like them.

They're pretty abstract. If you didn't tell me they signified dug in troops, I wouldn't guess.

If you want a marker you can just place next to a stand, what about the FoW-style ones that are like three walls of sandbags? They're not very realistic, but it's pretty obvious what they represent.

Personally I like to actually model dug in troops in holes. Cut standing ones in half and bung 'em in.
Top

Abstract or not, I've been using similar markers for almost 30 years now. For 20mm scale, they are short lengths of quarter-round trim molding coated in vinyl spackling compound and paint. Here is a photo of an Italian coastal battery from our 2014 Nashcon game. The "entrenched" marker is visible on the far side of the 305mm coast defense howitzer and it's emplacement, with a company of Italian infantry occupying it. 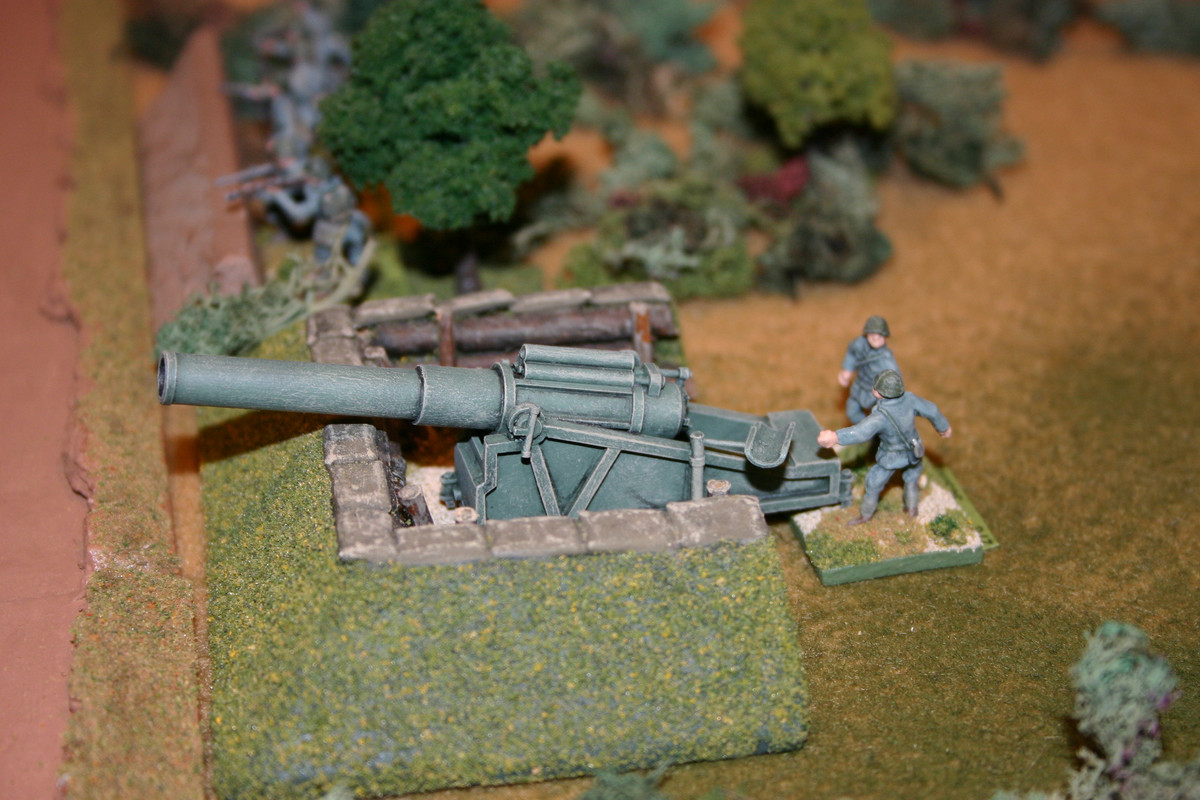 Cheap, quick and simple to make in quantity. Mine are part of a very large batch our club turned out in a single Saturday meeting back in 1990, all interested and contributing members getting a share of the finished markers to keep.

David, great markers but for me the storage volume would soon outweigh the amout used for the models themselves. the great thing is that we never agree so the variety just keeps on going.

The other supprising to me contentious issue on another board was in not making them obvious, particularly if they are not currently manned. To me it seems they are a great way for fog of war without tedious rules. They are physicaly there so ajudication is not a problem but overlook them and "classic deception/fog of war". get better an put some visible ones in marking a dummp position. That is in the military handbook, I just can't remember which one.
Top
Post Reply
4 posts • Page 1 of 1