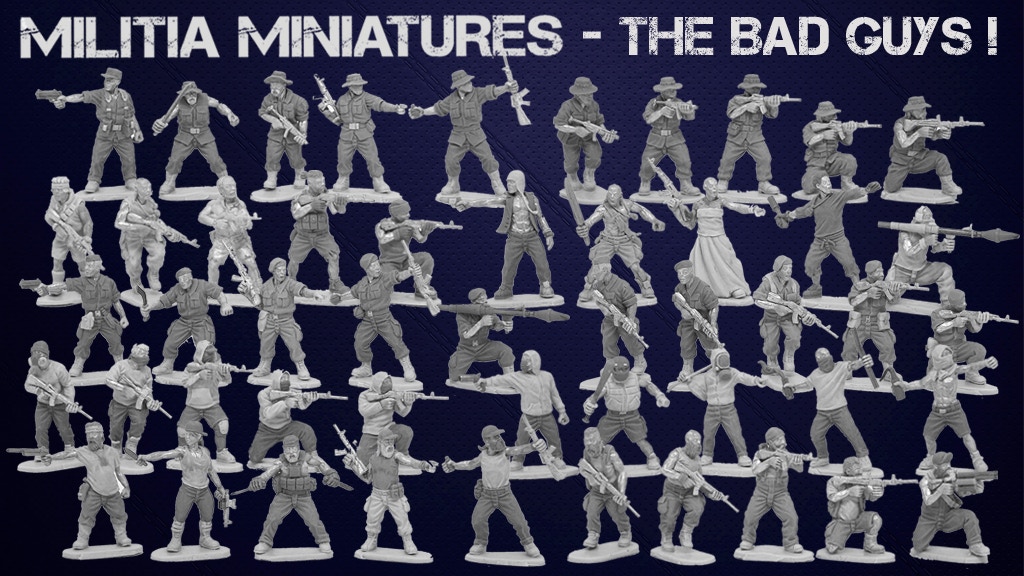 There's less than 24 hours left on our Militia Miniatures - The Bad Guys! Kickstarter! It finishes at 6pm GMT on Saturday 10th November so make sure you've pledged before the deadline: https://www.kickstarter.com/projects/mi ... e-bad-guys

We've got 55 excellent new 28mm sculpts produced by the extremely talented Paolo Fabiani and so far we've unlocked all of our stretch goals and added some really nice extras, including another 11 sculpts!

At £4000 we unlocked a resin Humvee which is now available as an Add-On, priced at £15. It comes with both the M19 and M60 gun options, as well as a free gunner figure!

At £6000 we unlocked the Robots! We acquired these from Crossover Miniatures earlier this year and there are three sets, Firing / Advancing / Command. Each set comes with two head options as well. Currently they come in packs of 4 so we're sculpting a 5th robot for each pack and these are available at £6 per pack of 5.

At £7000 we added a completely new set to the project, so the European Terrorists are now available to add to your Pledge, as well as their Leader!

Why should I pledge?

> Discounted prices - All of these packs will retail at £9.50 when they are launched on our website, so you get to buy them at £8.00 per pack (15% discount) as well as being the first to get your hands on them!
> Bulk discounts - Once you reach 10 packs, the price will come down to £7.50 per pack, saving you even more and making it £75.00 for 50 figures!
> Flat rate shipping - £3 in the UK, £5 for the Rest of the World, no matter how many packs you buy.
> Quick turnaround - Our first Kickstarter was shipped within 2 months of the campaign ending so you'll receive your pledge quickly. We've been in the industry for over 20 years now (Pendraken Miniatures) so we've got the experience and the staff to get these into production and into your hands. We're estimating January for delivery but we'd hope to have everything shipped a bit quicker.
> Free bases - All figures will come with free MDF bases, either squares or circles, 20mm or 25mm, your choice.

Pack A - Is the rank and file guys that make up the bulk of any bad guy army! Armed with rifles, they come with the ability to miss every shot they take, leaving your heroes to mow them down in search of glory!

Pack B - Is our 'Specials', armed with a mixture of swords, grenades, baseball bats, RPG's and more! These figures could be mixed in with Pack A for more variety, or used as command figures or personalities in your games. 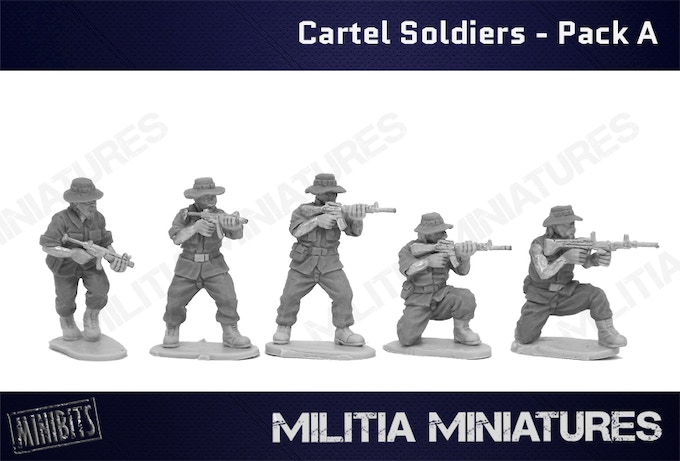 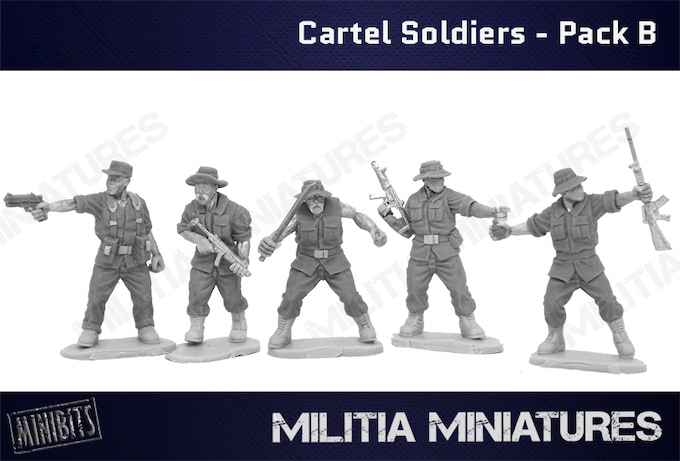 Usually found attacking downed choppers, and yes, he is wearing a wedding dress...! 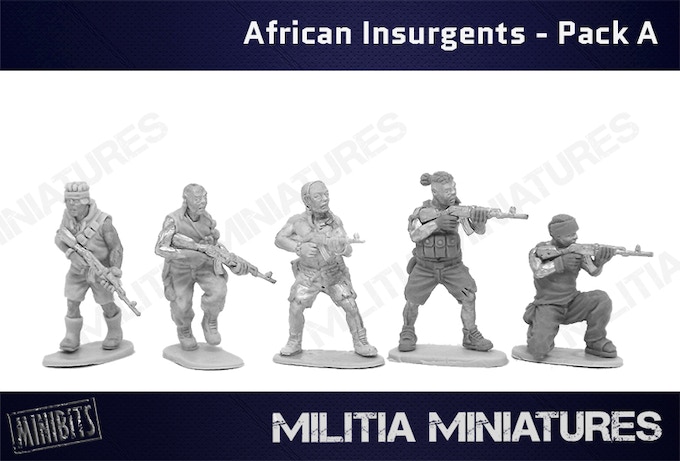 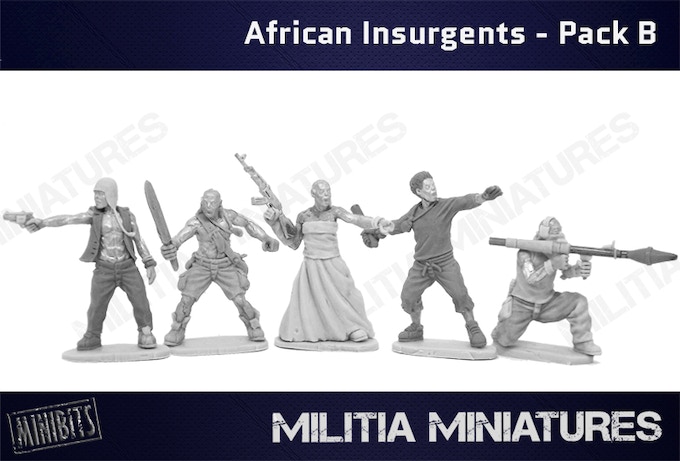 A more formal henchman, for your affluent crazy General... 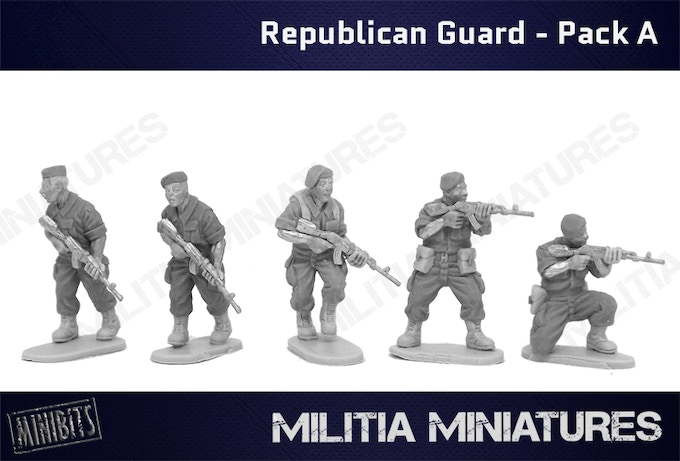 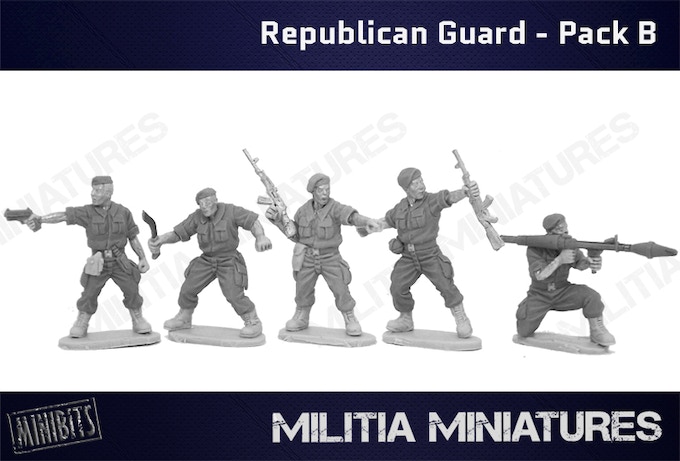 These guys just want a single night of freedom... 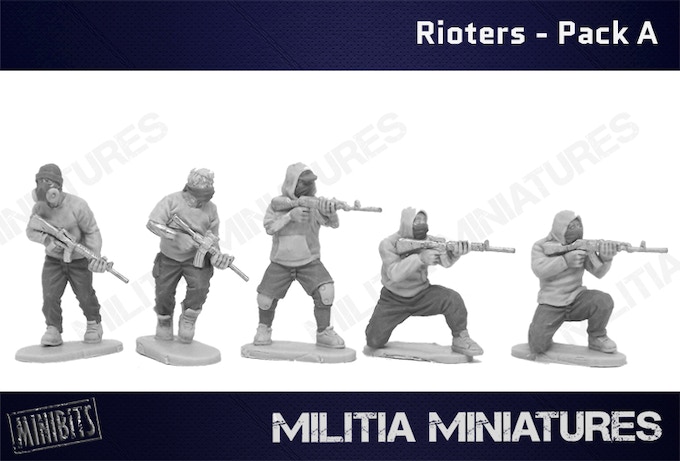 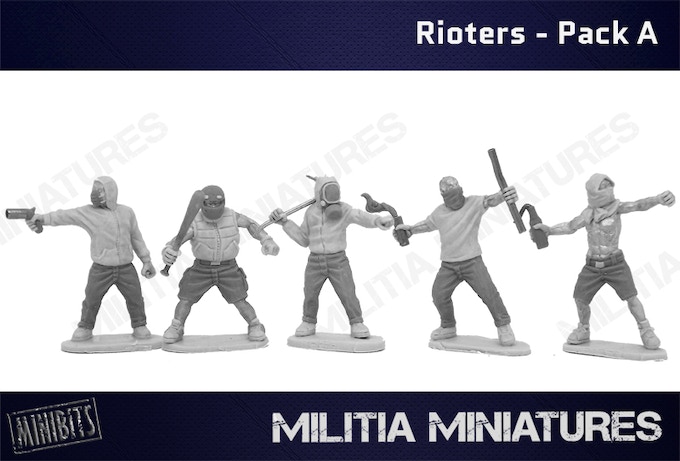 Brewing up Moonshine in the wilderness or directing tourists down the wrong road, we certainly wouldn't trust these folks! 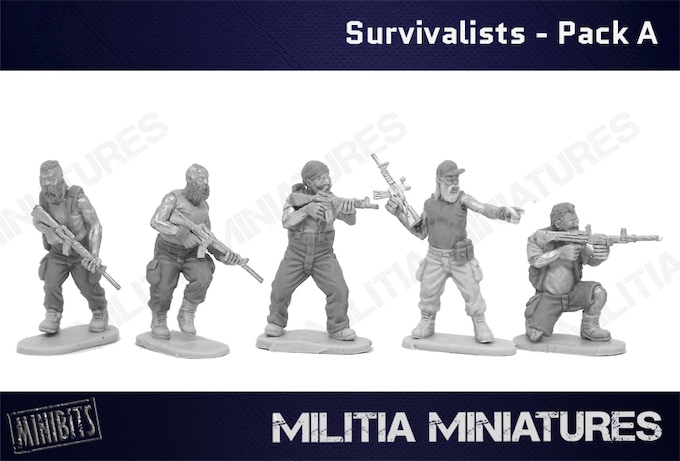 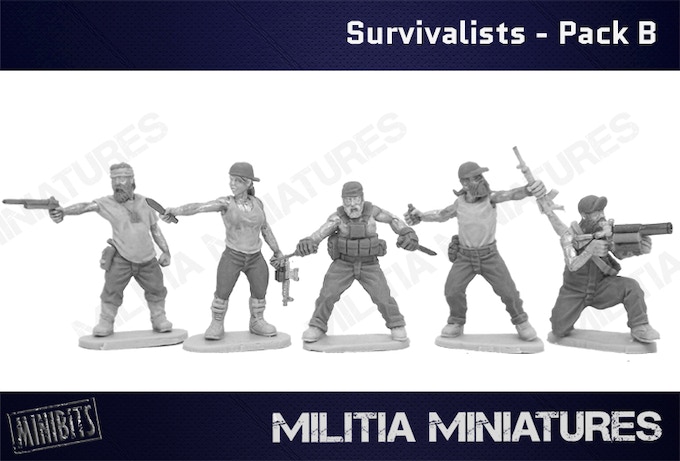 We've also added a 6th set to our campaign, so you can now also choose: 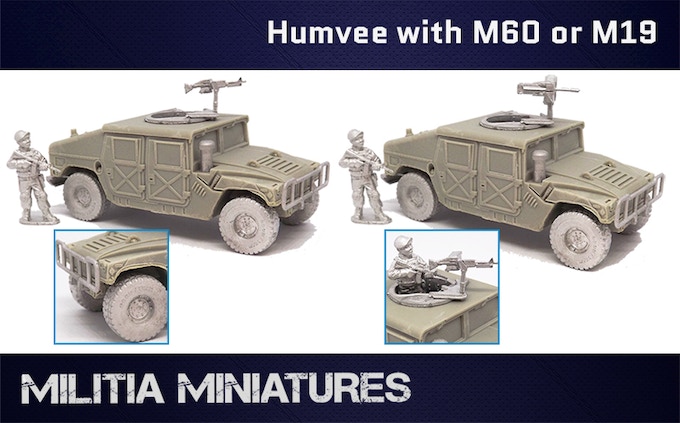 These will be individual character types:

- A suited Colombian drug lord for our Cartel soldiers.
- An African general for our Insurgents, a bit like an Idi Amin style figure.
- A Republican Guard officer, not quite the obvious candidate but similar.
- A more rotund chap for the Survivalists, who definitely wants to to make America great again...
- A female hacker type for our Rioters, co-ordinating things on social media.
- A well dressed chap in a suit for our Terrorists. 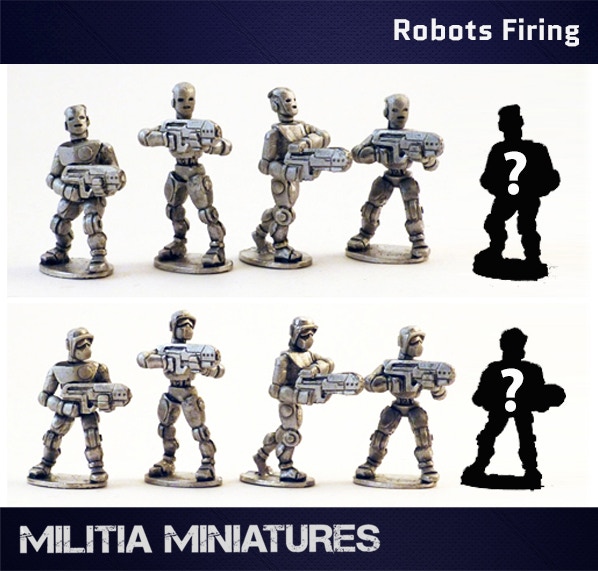 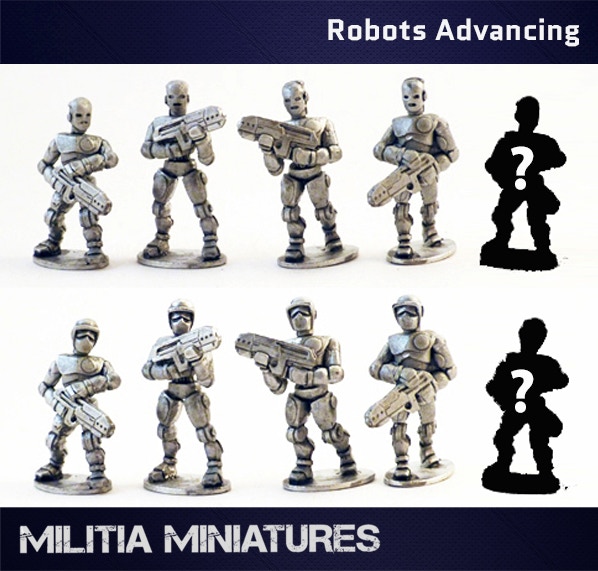 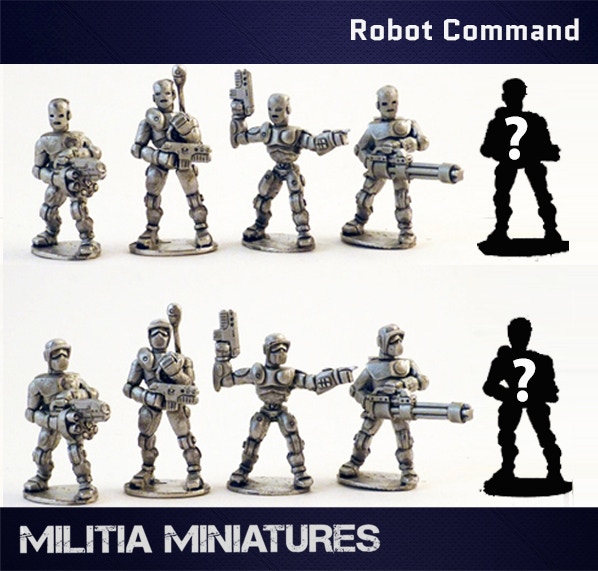 You can also choose to add any of the figures from our previous Kickstarter at only £2 per figure! Simply add that amount to your pledge and we'll include them for you.

Once you've had a look through the packs, calculate your total, head over to Kickstarter and make your pledge:

Add any of the previous KS Mercenaries:

There's not long left now, so make sure to pledge before the campaign ends!

Pendraken home of 10mm needs a new name for all these BIG lovely figures!! like "Dreigiau Mawr"

hope the pledgers enjoy the fruits of these sculptors.

I backed this KS and picked up some of the "Republican Guard", robots and a humvee. Thought you might like to see them painted.

I've painted the guardsmen up not as infantry, but as paramilitary police:

They're nice sculpts, but what I've found is that the gun barrels are seriously flimsy. I'm not actually expecting mine to last that long, which is a bit of a shame. With hindsight I should probably have done them on 2p pieces to give a bit of protection, but it's still an issue when you handle them.

I also did up some of the robots:

The Humvee is still in the painting pile, I'll get to that soon!
Top

I've painted the guardsmen up not as infantry, but as paramilitary police:

They're nice sculpts, but what I've found is that the gun barrels are seriously flimsy. I'm not actually expecting mine to last that long, which is a bit of a shame. With hindsight I should probably have done them on 2p pieces to give a bit of protection, but it's still an issue when you handle them.

I also did up some of the robots:

The Humvee is still in the painting pile, I'll get to that soon!

Apologies for missing this, nice work on these! We've found similar with the barrels ourselves unfortunately, they proved quite tricky to cast during the KS casting. We're having a think about the best way to fix it going forward.
www.pendraken.co.uk - Home to over 3500 products of shiny 10mm goodness!
www.minibits.net - MDF bases, Vallejo paints, I-94 decals, Red Vectors MDF buildings, Crossover Miniatures, Militia Miniatures and more!
Top
Post Reply
25 posts