I have not been doing much in the way of painting or model making for a few months because I am looking after my mother who is not to be left alone - she is very frail and liable to fall. However I have been doing a lot of reading and re-reading mainly about the closing stages of WW2 in Europe as the East & West fronts approached each other. I'm also re-reading Bernard Cornwell's Arthur trilogy at times.

Anyway, I have realised from the books that my Volkssturm are probably too well equipped with small arms and support weapons and very short on Panzerfausts! Almost everyone appears to have carried one. The descriptions by survivors seem to indicate that their units received a very few rifles, even then almost all were captured weapons of French origin, Italian SMGs, German made "Sten-Pistolen" etc. The most common weaponry appears to be an issue of two handgrenades, a PanzerFaust and sometimes a Teller Mine, rifle, pistol etc.

My stash has plastics that will be useful for conversions - Mountain Troops, Afrika Korps, civilians and others. All I need is asupply of cheap Panzerfausts, Teller Mines and the like. Incidentally there is no mention (so far) of Panzershrecks though they might be included and misidentified as PanzerFausts.

Brilliant. Just what I need. The Panzershrecks will probably go onto the PanzerJager Bren that I have to replace the plastic rod 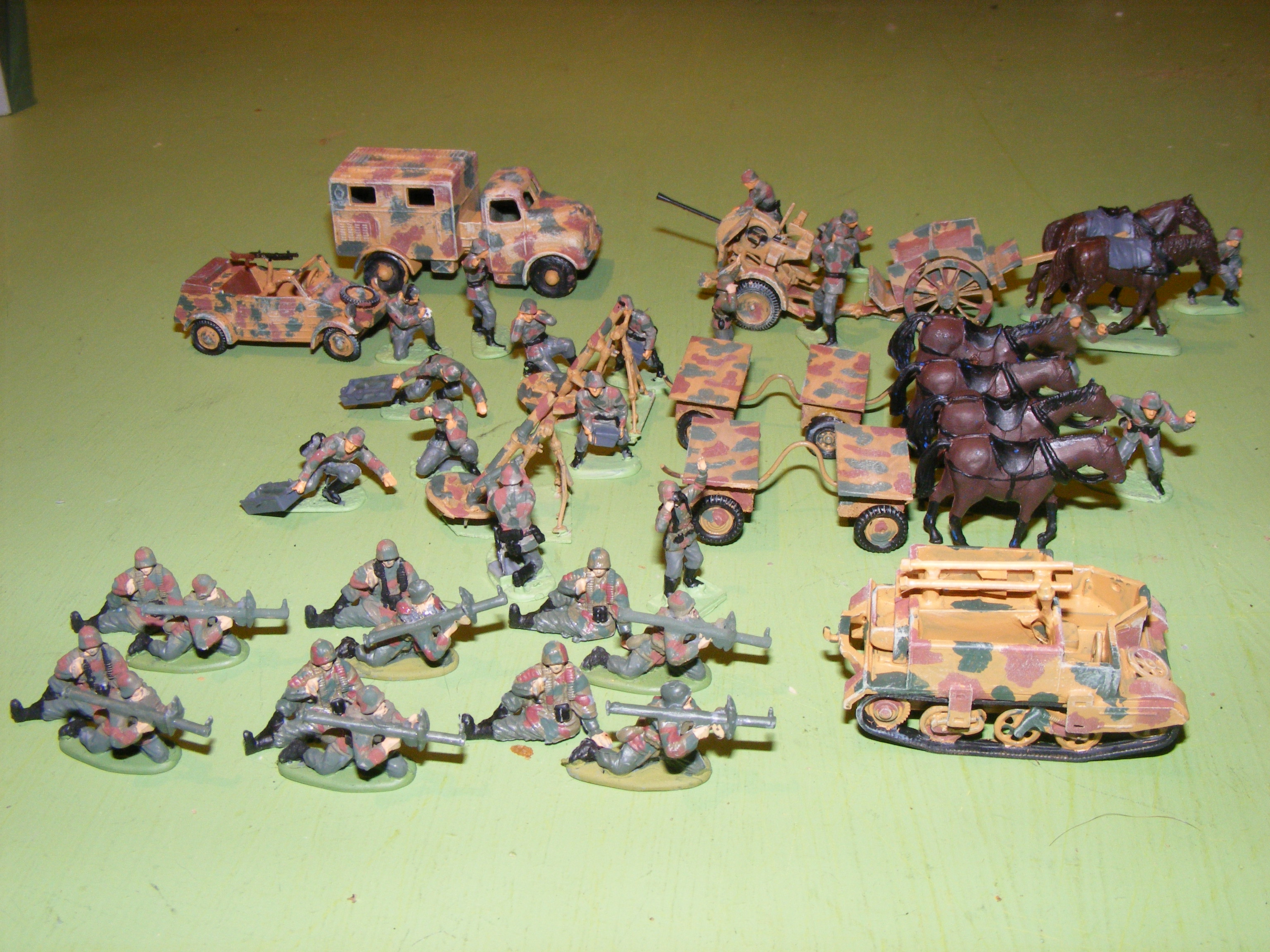 Nice unit Alan you can also get some spare weapons from the Plastic Soldier Company .

SHQ do a set also with mines too if i recall

I was hugely disappointed with this set, 3 or 4 spurs of the same figures and bits, i think I`ve use one tank commander, some of the drivers and seated figures and some of the stowage - I have most of it still un-touched in the box

bannockburn bhoy wrote: ↑
08 Sep 2018, 13:19
Nice unit Alan you can also get some spare weapons from the Plastic Soldier Company .

That is the HQ and support for my VolksGrenadier Regiment. I had a look at the PSC set on Plastic Soldier Review - plenty crew but only 3 Panzerfausts. Most of my model tanks have their hatches shut.
Alan
www.morvalearth.co.uk
Top

What scale and how many do you need?
Top

Thanks for the offer, very kind of you. I have ordered up 4 sets (12 Panzerschrecks and 60 PanzerFausts) from Sgts Mess along with some refugees and two gulaschkanone.
But to answer your questions - 1/72 as they are going on to Airfix and other plastics and as many as possible as I want to model some of the "units" and supply carts described in the books. So far I've gathered quite a lot of information on the Volkssturm with units varying from battalion strength uniformed and (reasonably) well equipped to company strength with little more than a few pistols but lots of hand grenades and panzerfausts.

Now I need find some suitable figures for BDM to act as couriers and supply carriers.
Alan
www.morvalearth.co.uk
Top

Now I need find some suitable figures for BDM to act as couriers and supply carriers.