A place for your pictures and tips
Post Reply
21 posts

Ok my Qing house building project, spanning 300 years of history, from 1644 to 1912, is 99% finished so here are some photos. (The 1% missing is my latrine user and another ceremonial gate that should both be finished soon).
My hope was (and is ) that I could use these buildings in various scales 15mm, 20mm and 25mm, and various periods of history right up to the warlord period and civil war that led to the founding of current People's Republic of China; possibly even for battles between China and Japan too, and maybe Russia and Japan from 1904/05 to later Japanese attempts after WW1 to oust reds and again in 1938 in northern Manchuria.
My scale / building sizes wander as I experimented. The buildings all owe a lot to the book, "The Chinese House: Craft, Symbol and the Folk Tradition (Images of Asia)", by Ronald G. Knapp, (1990). This led me to focus on producing wooden fronted houses (taking parts from mdf kits, usually of Japanese houses) and adding side and rear walls from styrofoam to represent either plaster covered stone walls or tamped (ie rammed) earth walls. Usually I got four house fronts from cannibalising one 28mm mdf kit with four wooden shutter sides. In one case I took a well known 28mm mdf kit of a Chinese courtyard house and cut it up to make three houses on a wider courtyard (adding extra walls and roof from styrofoam and card) so this better fit with Knapp's description of courtyard houses conforming to Feng Shui. All the houses have detachable roof and a very basic interior depicting crudely the traditional kang bed-stove.
The walls / gateways where topped by green tiles are 25mm resin Japanese Samurai walls by Hovels; and where topped by blue ridge tiles are my own styrofoam and card walls on scrap mdf bases (from the cannibalised mdf house kits!) The bridges are all fish tank / aquarium accessories 'tarted' up and added to bases to fit my existing blue canal or brown river bases!
CarlL
The Governors Courtyard 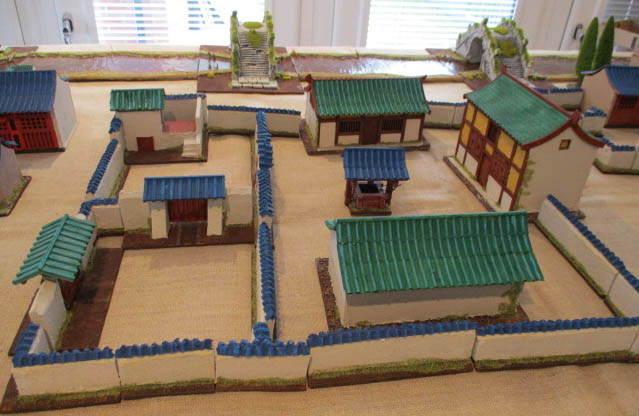 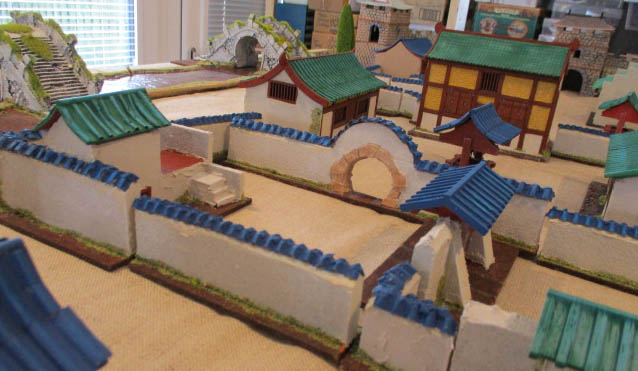 The Governors latrine and pigsty 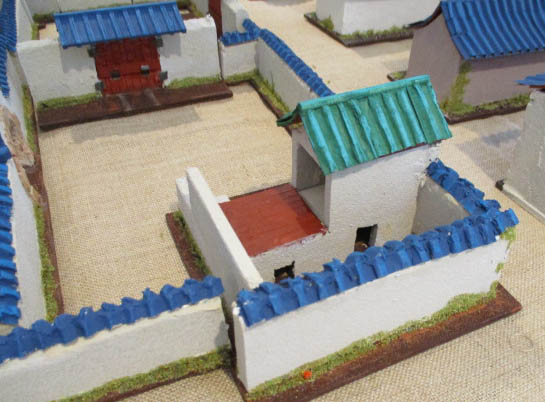 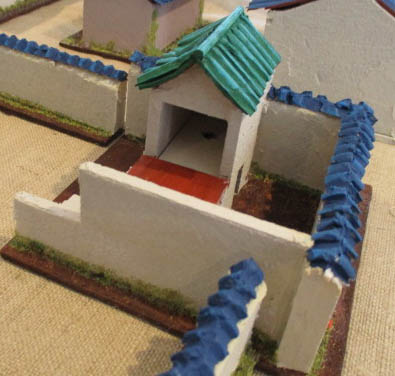 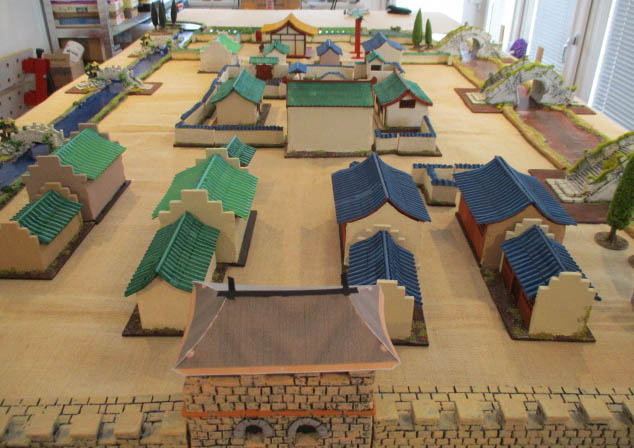 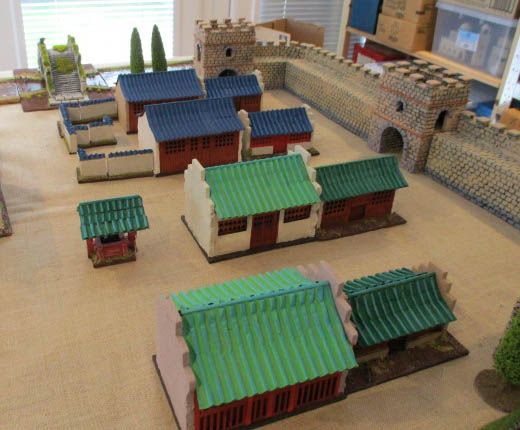 The Temple Quarter (apologies I only covered one faith!) 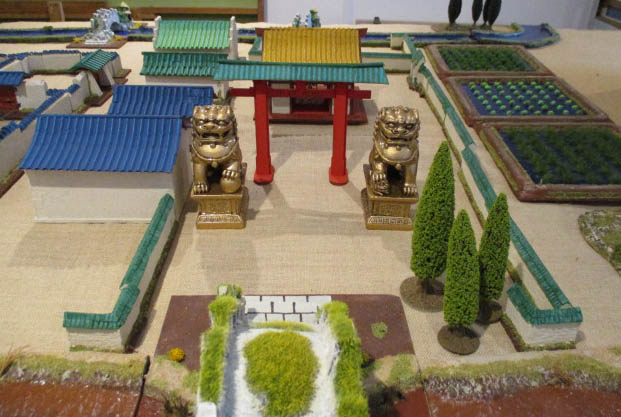 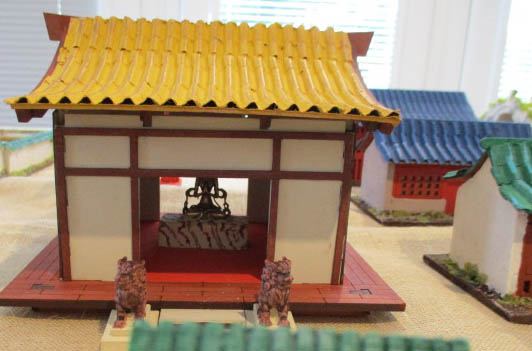 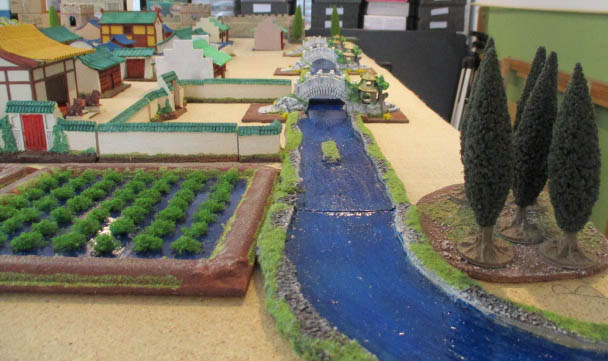 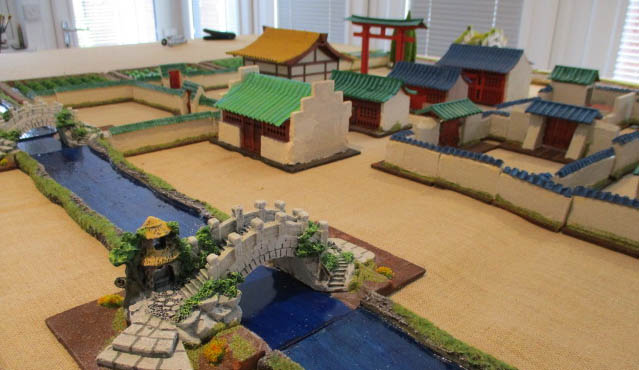 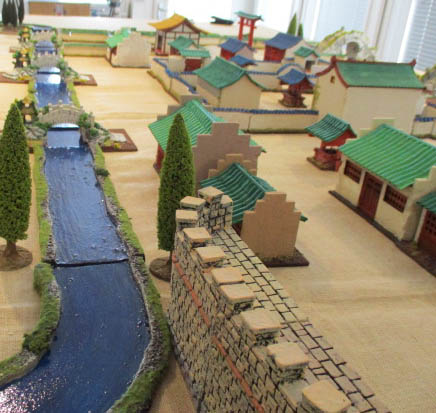 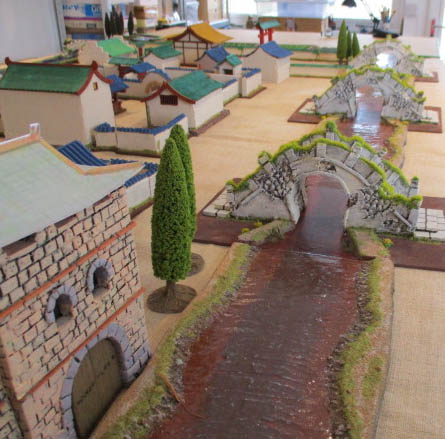 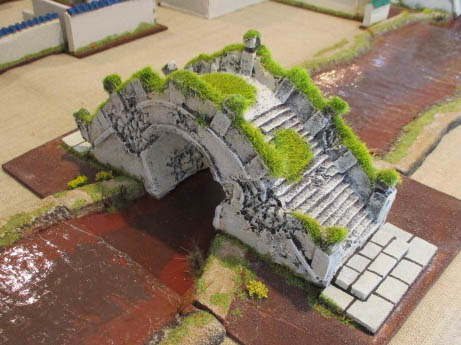 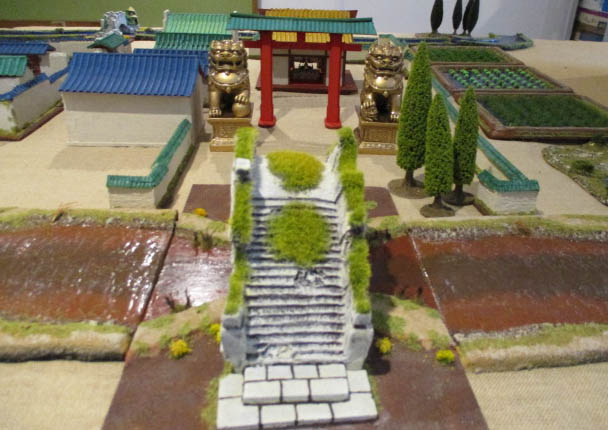 Superb mate, takes me back to the wonderful Peking game Pete and Will ran at Broughton a few yrs back

Very impressive; where did you obtain the chinthes?
If you are such a great writer make me want to logon and respond! [Adapted]
Top

In my photos: the two large bronze looking ones (resin pre-painted bronze) came from an ebay search (I cant recall how much, but I am 'mean' buyer, so not too much!) and are really too big as they are more like book ends than statues for my temple quarter.
There are also two smaller ones (too small!) on other side of my golden roof temple that are resin castings (Which I painted brown swirls to try and recreate marble effect) from came from TTC (via ebay) that come as part of a set called "TTCombat - Great for Bushido Asian Samurai Sake Buddha - Eastern Accessories 2" (currently retails for £7.95p per set). Latter aimed at Japanese games but offers a Buddha and two Foo Dogs.

A lot of Asian or Japanese Buddha related material can be used in China as the basic art form and religious iconography migrated east from India, through China (and elsewhere) to Japan.
During the English covid "lockdown" I could not do a shop of Chinese or Asian style shops or "Hippy" stall / markets for similar items so my search was limited to google and ebay or Etsy searches.
CarlL
Top

Great work, I painted my tiled walls for Beijing in terracotta is blue and green more appropriate?
What's the point of doing one period, when you can do them all.......... In life most people specialise so gradually they know more and more about less and less so eventually they know everything about nothing. I work on a broad front so eventually I'll know nothing about everything.
Top

Will,
I think China has a wide variety of styles. I noticed from photos and some reading about history of housing that glazed tiles were (may still be) used extensively in building work from walls to roof ridges. And green and blue glazes seem popular. There is a system of colours in Feng Shui that reflects both folklore (it seems from my limited reading) and the principles of building in Feng Shui. Blue represents water, Green represents wood / trees. But red is there too and represents fire and is associated with fame. So I don't think your colours are wrong. Just different elements represented!
See what photos I have found to illustrate this.
CarlL 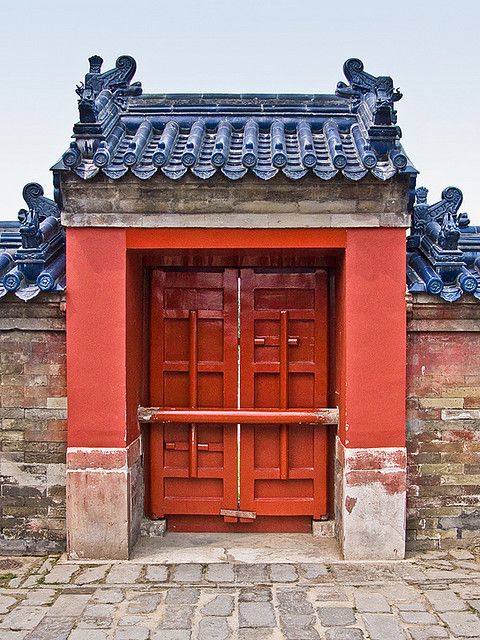 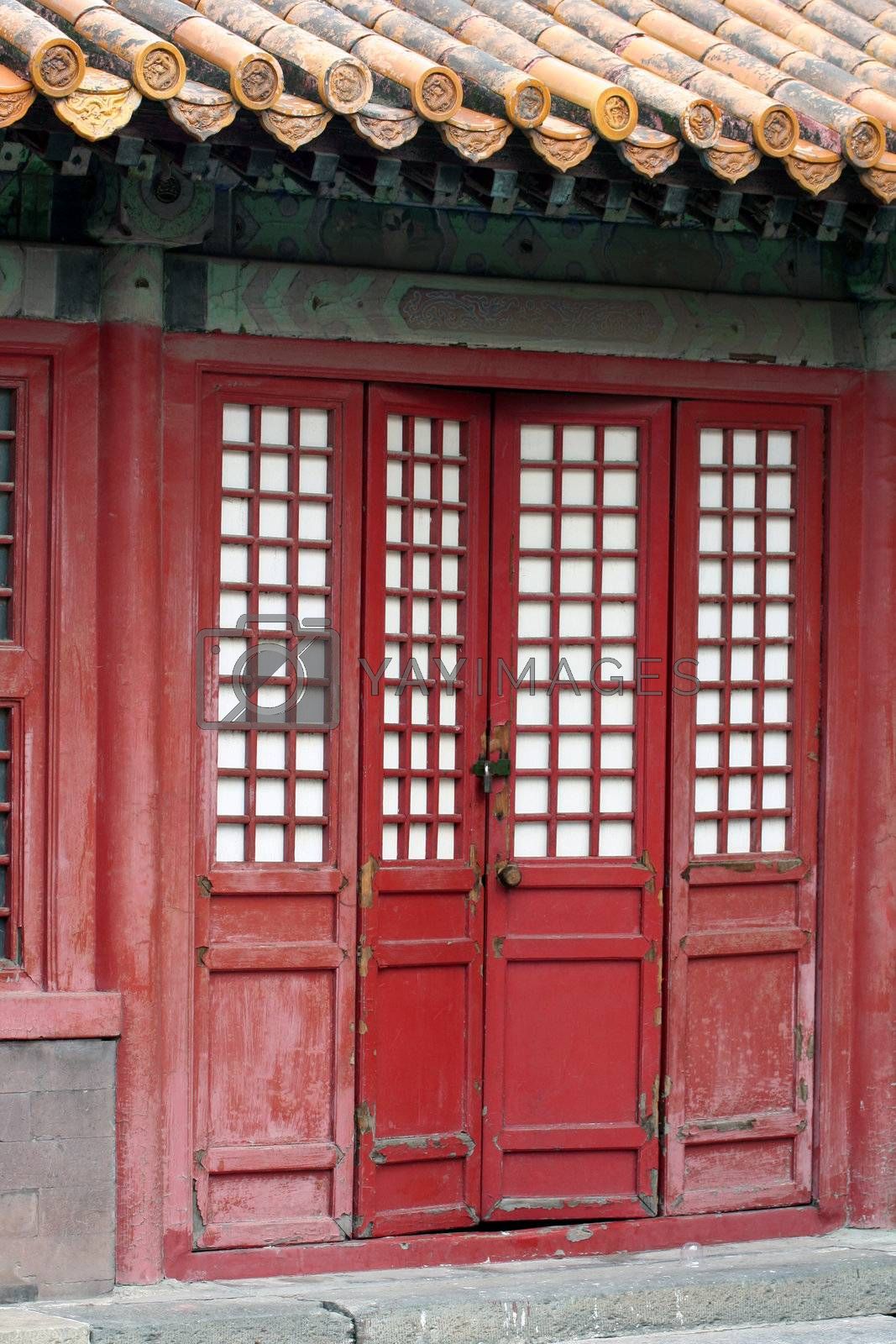 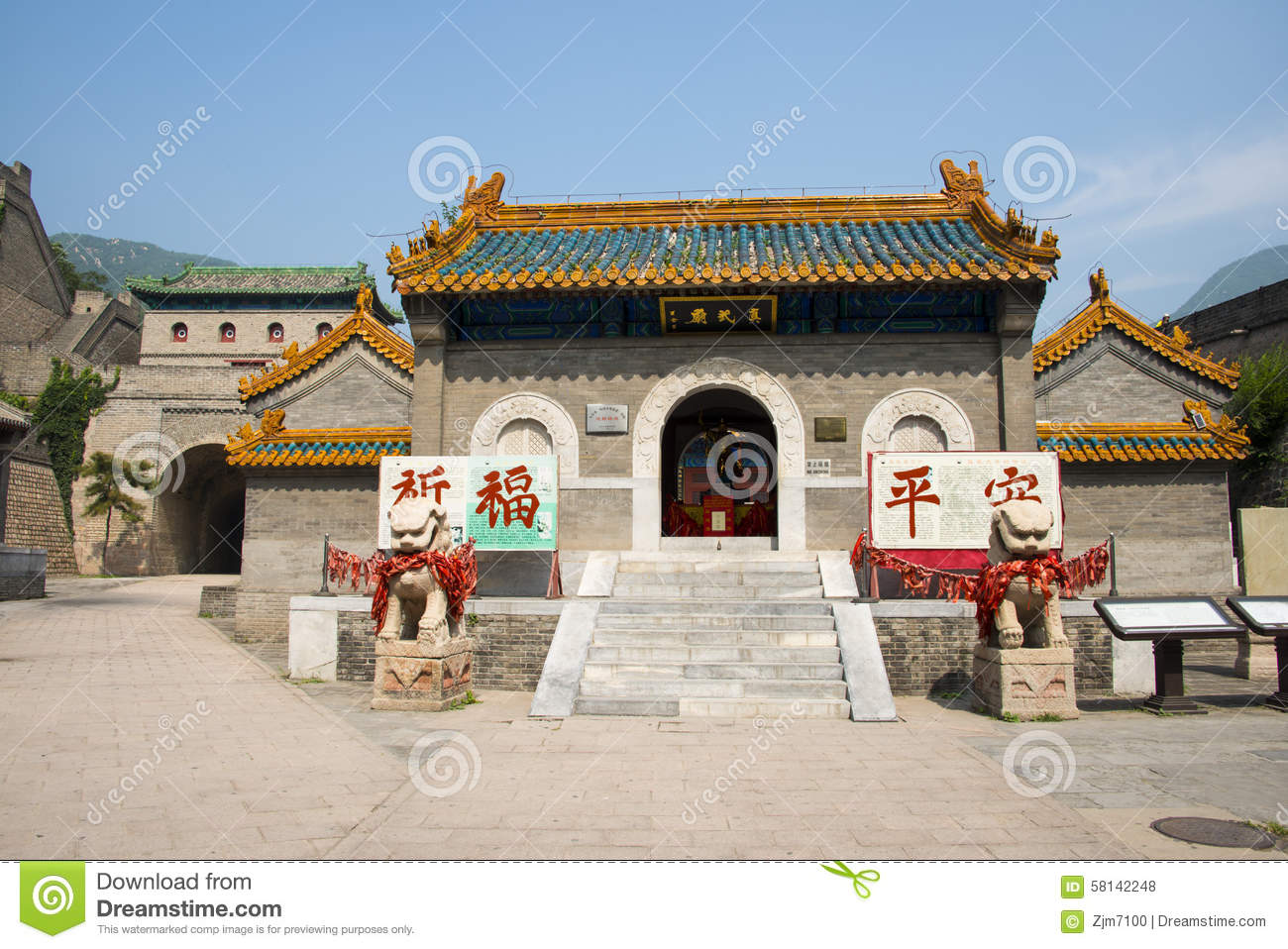 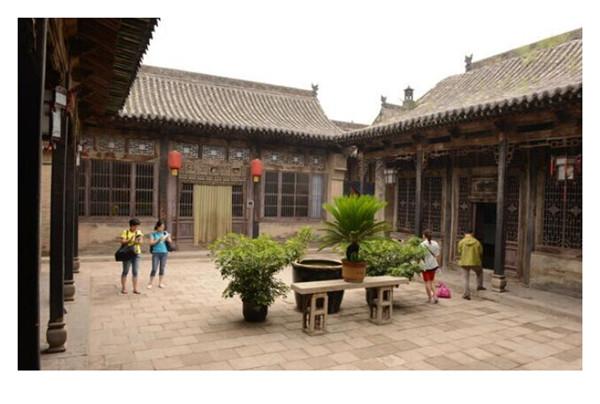 Will,
on theme of glazed roof tile colours, a source from out of our period, (the Song Dynasty regulations of 1103AD called Yingzao Fashi) shows the early establishment of glazed tiles in 'privileged' Chinese building the following comes from
https://www.arct.cam.ac.uk/Downloads/ch ... -to-11.pdf
"
When qingg~ln tile manufacture clearly reached the limits of its technology, glazed tiles
established themselves. The Yingzao Fashi specified both. Glazing is a process of forming a thin
layer of glass of brilliant colour on exposing surfaces of tiles, bricks and other clay wares to make
them more attractive in appearance and less permeable to water. Twice f~ng was required to turn
the products into glazed tiles or bricks. The Chinese invented porcelain and developed complicated
glazing techniques based on the achievements introduced from West Asia, exhibited by "threecolour" glaze objects attained in the Tang during the seventh-to-eighth century. A recipe for glaze
was given in the Yingzao Fashi, Chapter 15. It was a mixtures of metal oxides and minerals:
"Brushing with a paste of litharge (monoxide of lead, PbO), quartz (powder) and copper powder
(ratio 3:0.3:1) mixed with water (warm water in winter) on exposing surfaces of baked tiles." The
tile was then fired again, resulting in a rich effect of colour on the glazed surfaces. By modem
knowledge this recipe makes green colour, which has a special quality of sheen, and imparts a jadelike character. Glazes derived from copper and iron with lead were melted together at a temperature
of about 700°C giving a colour of brownish-yellow, or green or orange-red depending on the
proportion of the component parts. The Yingzao Fashi added that "lflitharge is not available, it can
be replaced by heating black tin and nitre in a pot for one day. After the mixture has cooled down,
it is crushed, milled into powder and parching, then heating again while covering the pot with
bricks for another day."
Although glazed wares were mostly green, a brownish-ochre glazed pagoda of ground scale has
survived at Youguo Temple (1049) in Kaifeng, Henan Province. It demonstrates the fine
craftsmanship of the Song dynasty. In fact, as early as the time of the Tang, lead-bearing glazed tiles
with various shades of colours had been available for imperial palaces, state buildings, temples and
pagodas.
"
CarlL
Top

had to give up the lurk for that John
Top

That is a colorful cityscape. Imagine it makes for a very nice game.
Top
Post Reply
21 posts