OK this project of mine is set in 1900 so isn't really 20th century, but on further research I found my northern China houses would probably also work for houses in the warzone of the Russo_Japanese War of 1904-05, (for which I have 15m figures - dont ask why!) and the later Warlord wars in China and wider civil war and later war with Japan (for which I have some 20mm figures). (Besides being useful for conflicts pre 1900, as far back as Han China!!)

I have so far made 12 houses from styro foam and recycling parts from 3 mdf model kit houses (intended as Japanese houses but now authentic Chinese thanks to ideas from Ronald G. Knapp's "The Chinese House" - great little book for terrain geeks!) and I took a 28mm mdf kit of a Chinese courtyard house that (to me following Knapp) didn't abide by "fengshui" geomancy (and geometry!) and I re built this with help of more styro foam as three more houses for a northern Chinese courtyard complex (or great house - could be a clan dwelling or aristocrats farm or provincial governors palace but I digress). I have added a simple temple too, and two wells, and started making some styrofoam based walls and gateways to add to some Hovels walls (from their 25mm Samurai resin walls).

Well as you can see I got the bug for this Chinese terrain. Among my research I discovered that these city courtyard complexes and rural walled villages often had communal privy, or latrine, (sometimes in middle of the square or courtyard or sometimes more discretely tucked away in a corner) as well as the familiar bucket or porcelain (if you are rich enough) under the bed. (I will try to add some images I found via internet searches.) So I decided to add a latrine thats feeding the pigsty (yes the pigs were fed human excrement! A tradition that may still be practiced in rural China and goes back some thousands of years!) to my terrain building. The latrine is a hole in the floor job (forgive the unintended pun) over which the toilet user would usually crouch after dropping trousers and lifting shirt.

Now you may be asking why... nothing racist going on, its just that these descriptions reminded me of my early childhood weekends at grannies old house in the 1960s, with its outside latrine (no pigs mind) and no bath (save the tin bath); it was a modest terrace and my nan a pensioners by the 1960s; she had mod cons like electricity (for lighting and her Rediffusion TV - an aunt in a similar house a mile away had gas lighting run off town gas - but I digress again) and a gas geyser for hot water (for the tin bath!). The wooden bucket and Arab style toilet are I believe still used in remote areas of China, away from the modern city skyscrapers etc..

SO WHAT DO I WANT YOUR HELP WITH? suggestions please for sources of a plastic or metal figure in 20mm (or thereabouts) thats either sitting or crouching down that I could convert to a latrine user, with pants down and shirt up (after conversion and no rude bits will be shared as its a clean latrine!) I have been looking through my odds and ends collection thinking I must have a sitting or crouching figure I can convert (even if it starts fully clothed!) 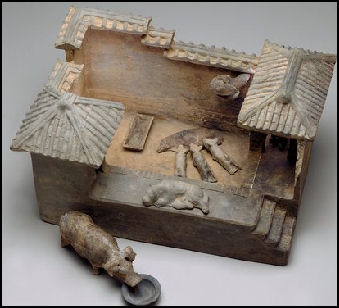 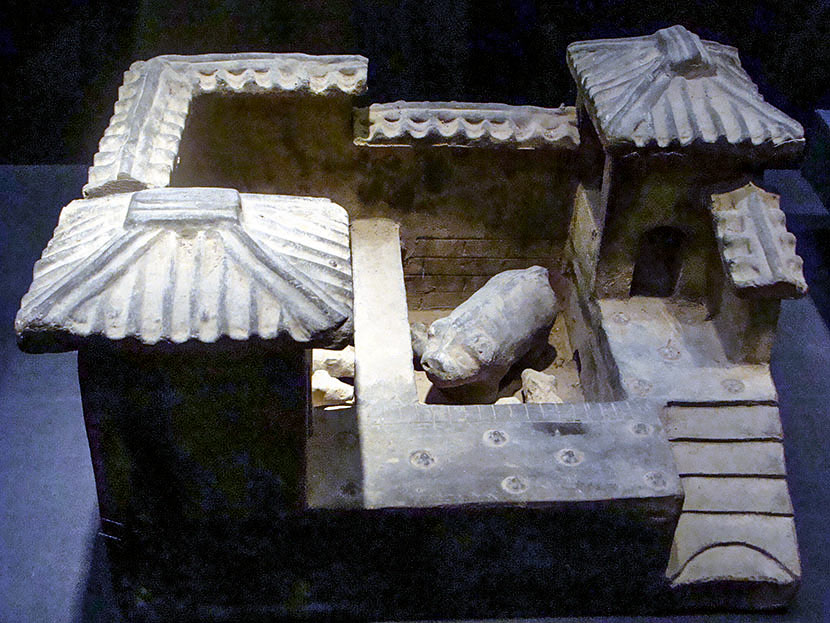 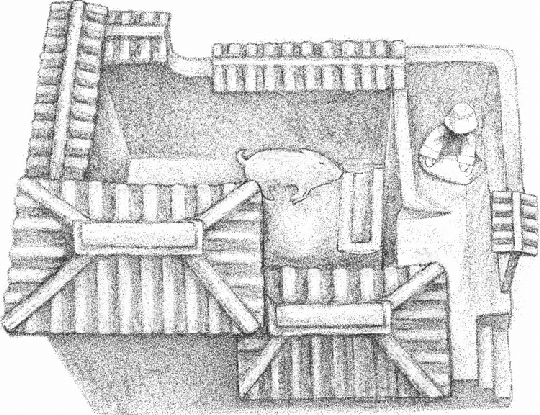 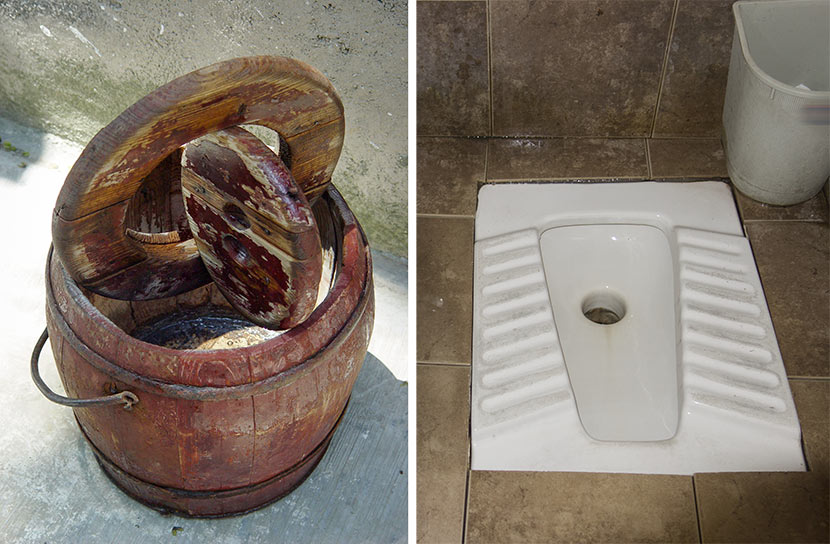 PS here are some distant photos of said initial 12 buildings, tucked away behind my "new model" Chinese Brigade of circa 1900.
CarlL 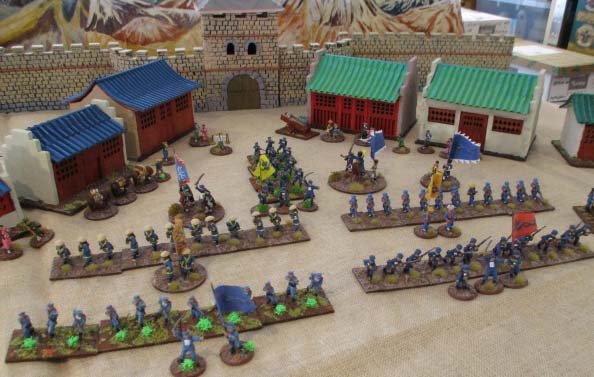 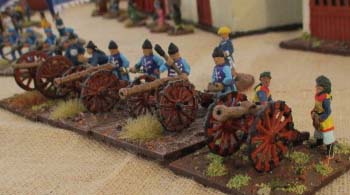 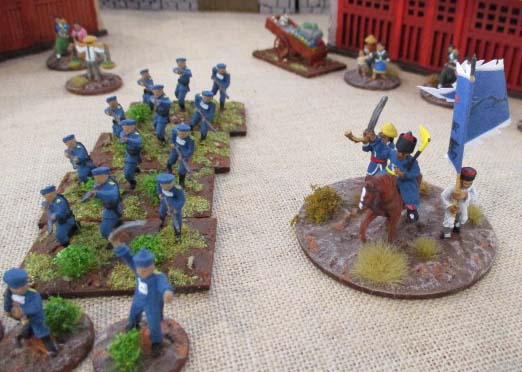 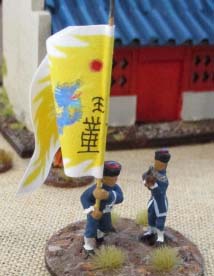 Apologies to any Forum users offended by my time bending.

And any figure ideas or swop or donation greatly appreciated.
CarlL
Top

How about a cavalry man or wagon driver??
"“Sir with the compliments of my officer, your shooting was excellent – you killed four of our men”!
Un-named Traillieur to an artillery officer at R`Fakah, Morocco, Feb. 29th, 1908
Top

Yes, good ideas.... keep them flowing Richard (and others).
You immediately sparked off "Airfix Cowboy wagon driver" and "Have I got an un-used one!?"
And "Airfix Red Indians.... would one of those old riders do?" I shall check them out.
I think my WW2 tank riders and drivers are probably too encumbered with kit.... but I can check them out too.
Then there is "Maybe one of the old WW2 Airfix MG crew from Russians that crouch? Or a WW1 Airfix MG crew?"

These two gents from Airfix Wagon Train may work! 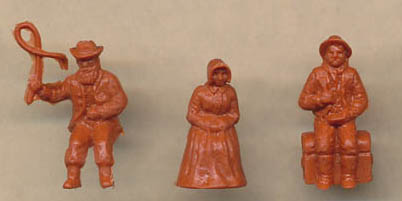 Or if I want bare legs and remodel little else may be one of the Airfix Red Indians! 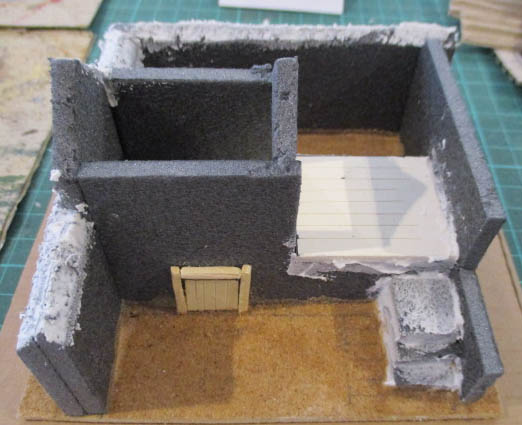 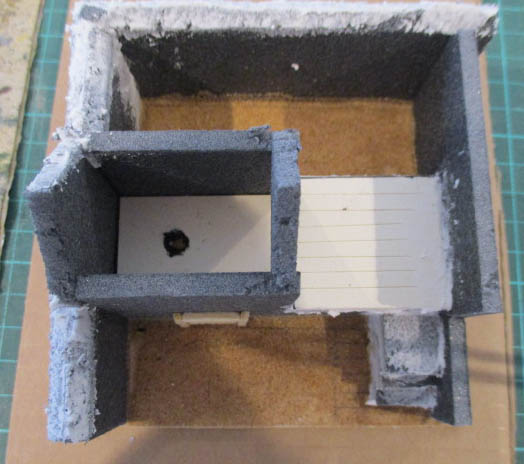 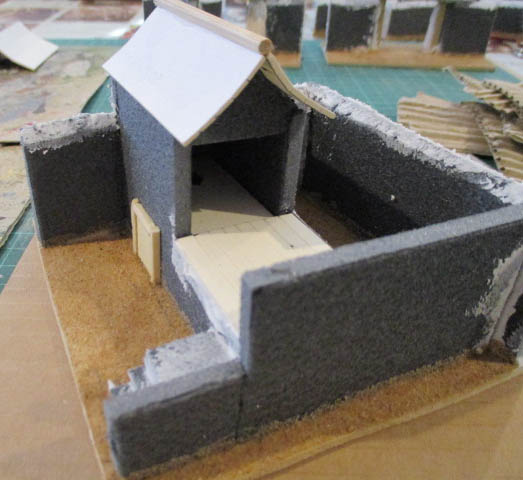 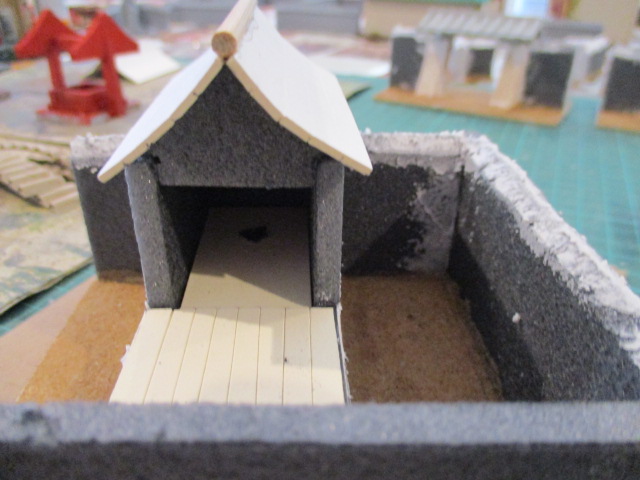 These are the three buildings I restructured from the "Warbases" Hou house, as I wanted to create a bigger courtyard with these three buildings facing onto the bigger courtyard. The Warbases ad photo of the Hou house is added for comparison. I expanded their model using styrofoam and card, by building onto the original "Warbases" components (which provides a small courtyard enclosed by main building and its two wings).
The roof is removal in each house, with very simple interiors including a 'simple' representation of the household's kang, often one in each wing of the building. (The kang is "an elevated platform made of earthen bricks which in winter becomes a heat-dissipating surface for the hot air which passes from the nearby cooking stoves through a warren of flues embedded within each kang" - from page 10 of Ronald G. Knapp's "The Chinese House".)
CarlL 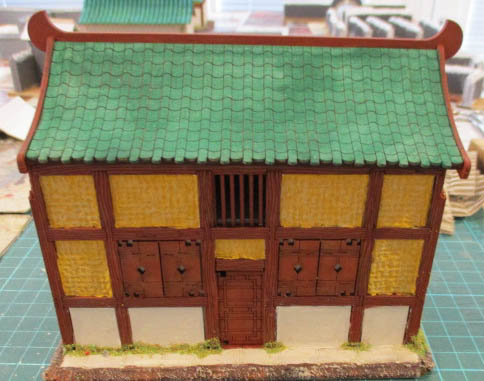 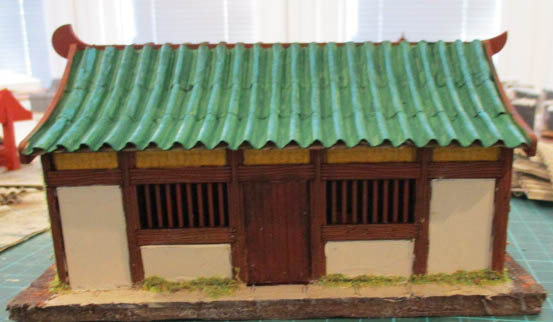 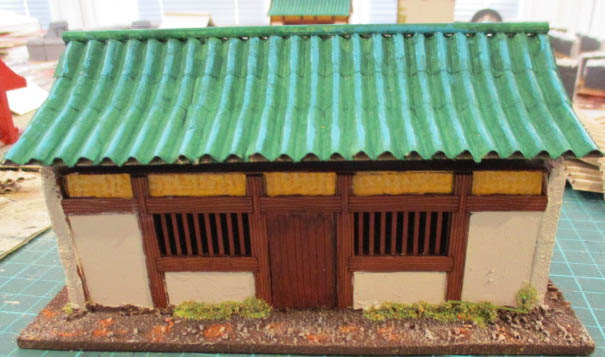 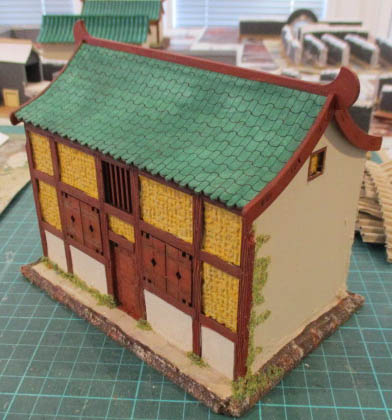 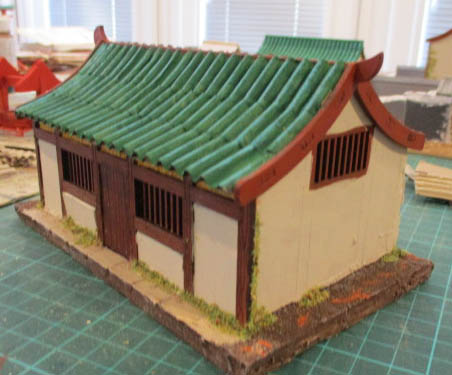 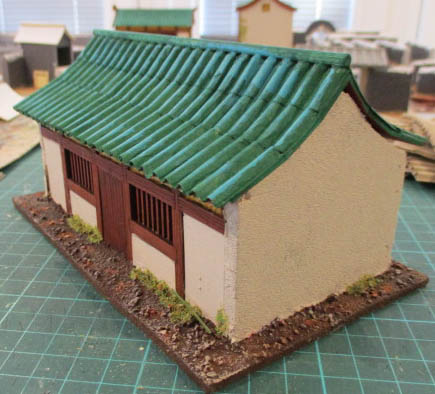 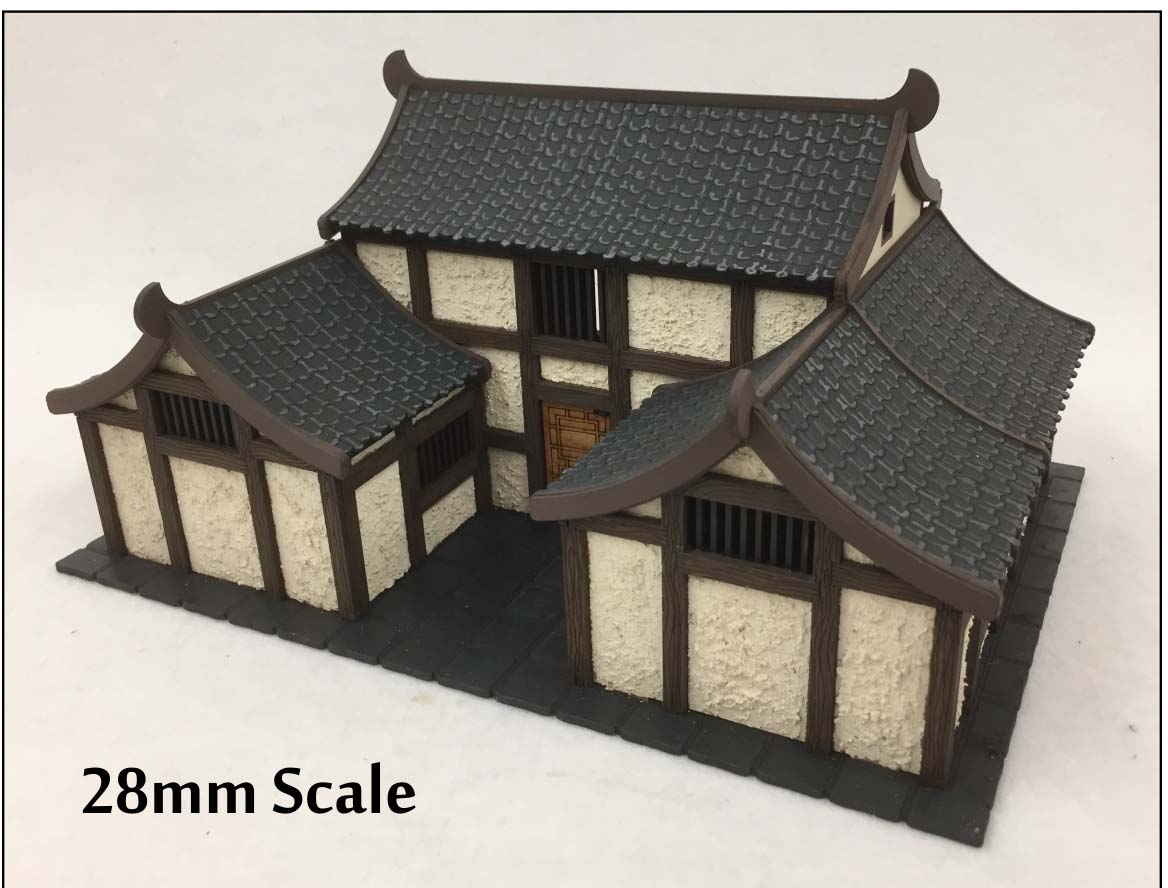 Look away if you are of a sensitive disposition!

Here is my latrine user (the finished latrine features in another post).
Well having built a Warlord / Governor's latrine I felt obliged to put the Warlord / Governor or his senior Mandarin in there with his pants down. I have modelled him as an old man, needing his staff (with monkey head skull - a present from a Mongol shaman that they 'executed') to help him crouch in his old age.
Other than a "Hunt the Governor" assassination game plot, I am not sure what use I will make of him other than as the latrine user.
Apologies to those of a sensitive disposition for lowering the tone of this website!!!
CarlL 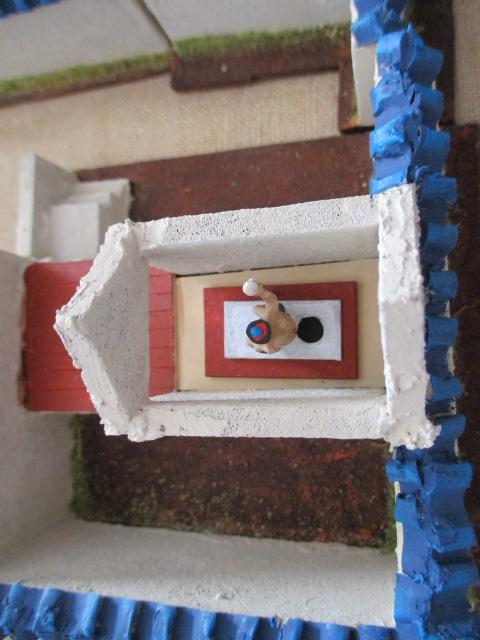 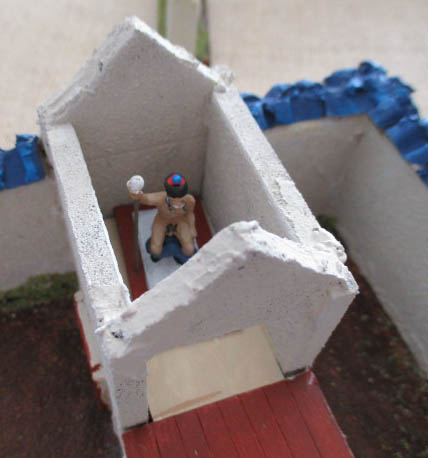