A house in Tigray province

A house in Tigray province

I thought this colour photo, (from pp44/45 of Geographical, magazine of Royal Geographical Society, July 2020 issue) would be of interest to any interested in modelling houses from Ethiopia, and Eritrea, as Tigray province lies on the border of these two areas. 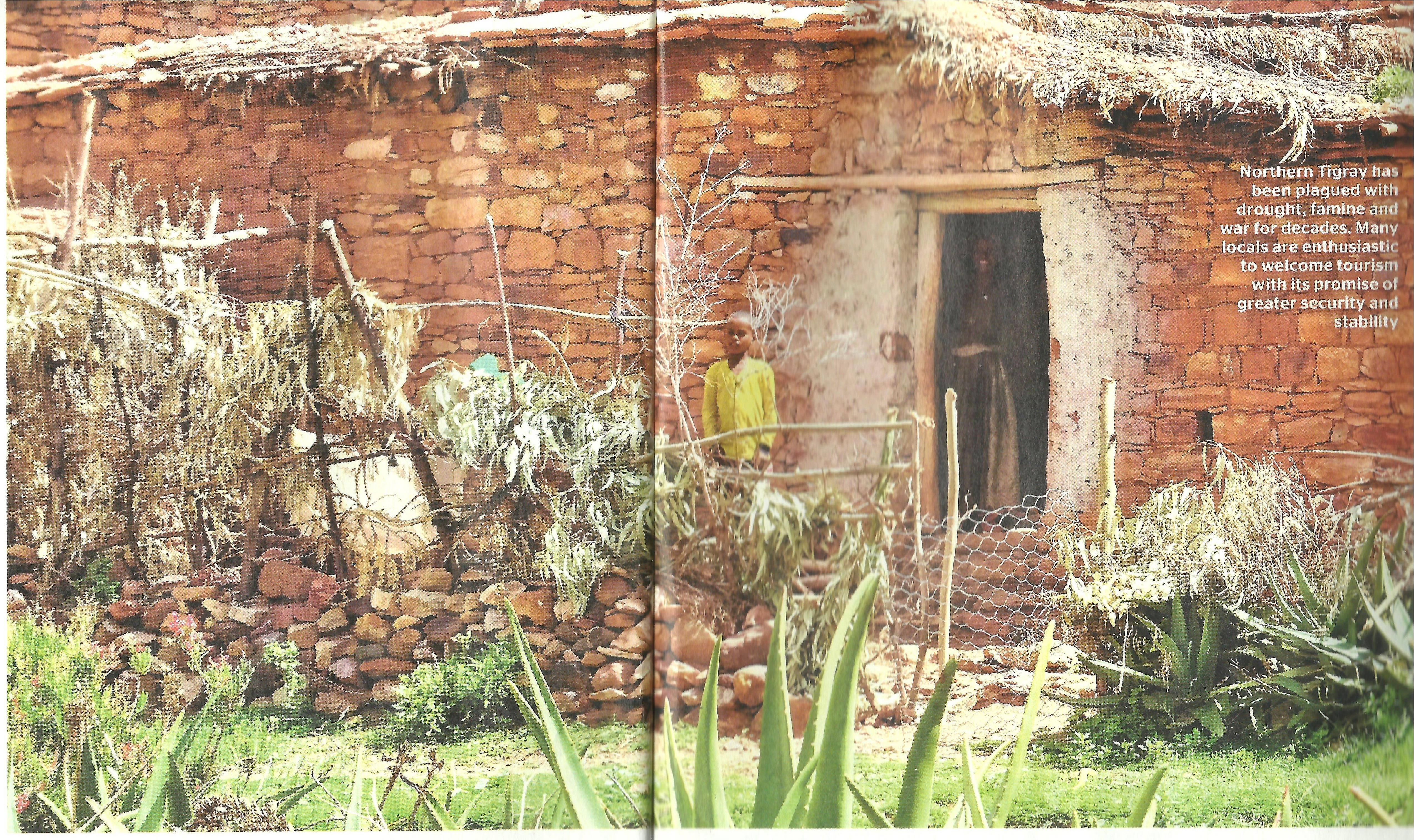 Tigray is a geographical area of political importance. Before our historical epoch (but only by four years) it was the province where Italian imperialist aspirations came to an abrupt end in 1896 at the battle known as Adwa and as Adowa. It is a province bordering the Italian colony of Eritrea, (from 1882 till 1941), from where Italy recruited soldiers, ascari, who fought the Mahdi forces marauding from Sudan, (eg battle of Agordat 1893) and later watched rather than fought the forces of the Somalian Mahdi, Al Sayyid, (who made a treaty with Italy in 1905), until his death in 1920. Al Sayyid would take refuge behind Italian frontier of their expanded colony as it stretched into Somalia. Eritrea was also the base from which Italy invaded Abyssinia / Ethiopia in 1935. Of course there are many modern (post 1945) wars that have savaged this province too.

The photgraphed house, it appears, lies in the Agame mountains, (from the accompanying article about development of tourism), where surface Adigrat sandstone can vary from red to yellow to pink and can be veined with quartz. Underlying this is Enticho sandstone, which is white in colour with iron rich seams. So the red colour of this (photographed) house appears typical of this region.

This got me thinking about two model houses I had bought from Anyscale Models, and had intended to portray as Rif Houses; "Do I need more Rif houses?" "And would these models be suitable for Abyssinian / Tigrayan houses instead?" I thought? And so this is next weeks project, having washed and primed these two model houses today. My inspiration for colouring and finishing them will be this photograph.

The two models I bought from Anyscale Models are "Scottish Black House with stone chimney" [reference SKU 20s260 priced £5.99p when I bought it, I think in mid 2019!] and "Scottish Black House" [reference SKU 20S259 at £5.99p] which my wife, from her past Scottish living, thought a typical longhouse, with family living at one end and animals at the other! Again it is thatched but in a different style and has a possible 'tin' chimney, which I first thought I would remove but decided to keep as a sign of a posh house with internal iron, wood burning stove! The models have removable roofs but no internal details so the wood burner will have to wait!!

These are the two resin Anyscale Models which I am going to use. They have been washed and primed with spray paint. Apologies for the poorly lit photos and flashlight washing out details.
CarlL 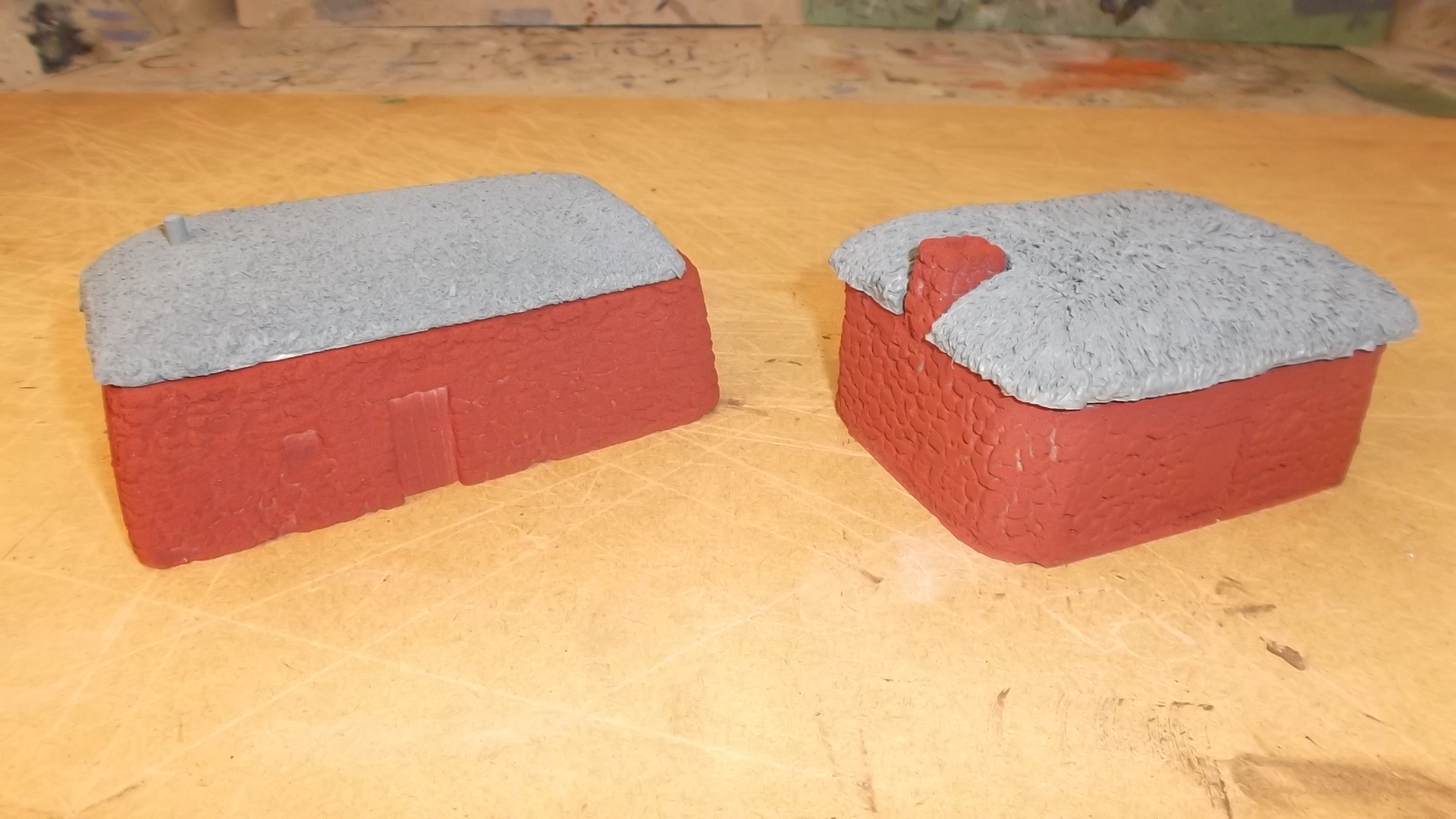 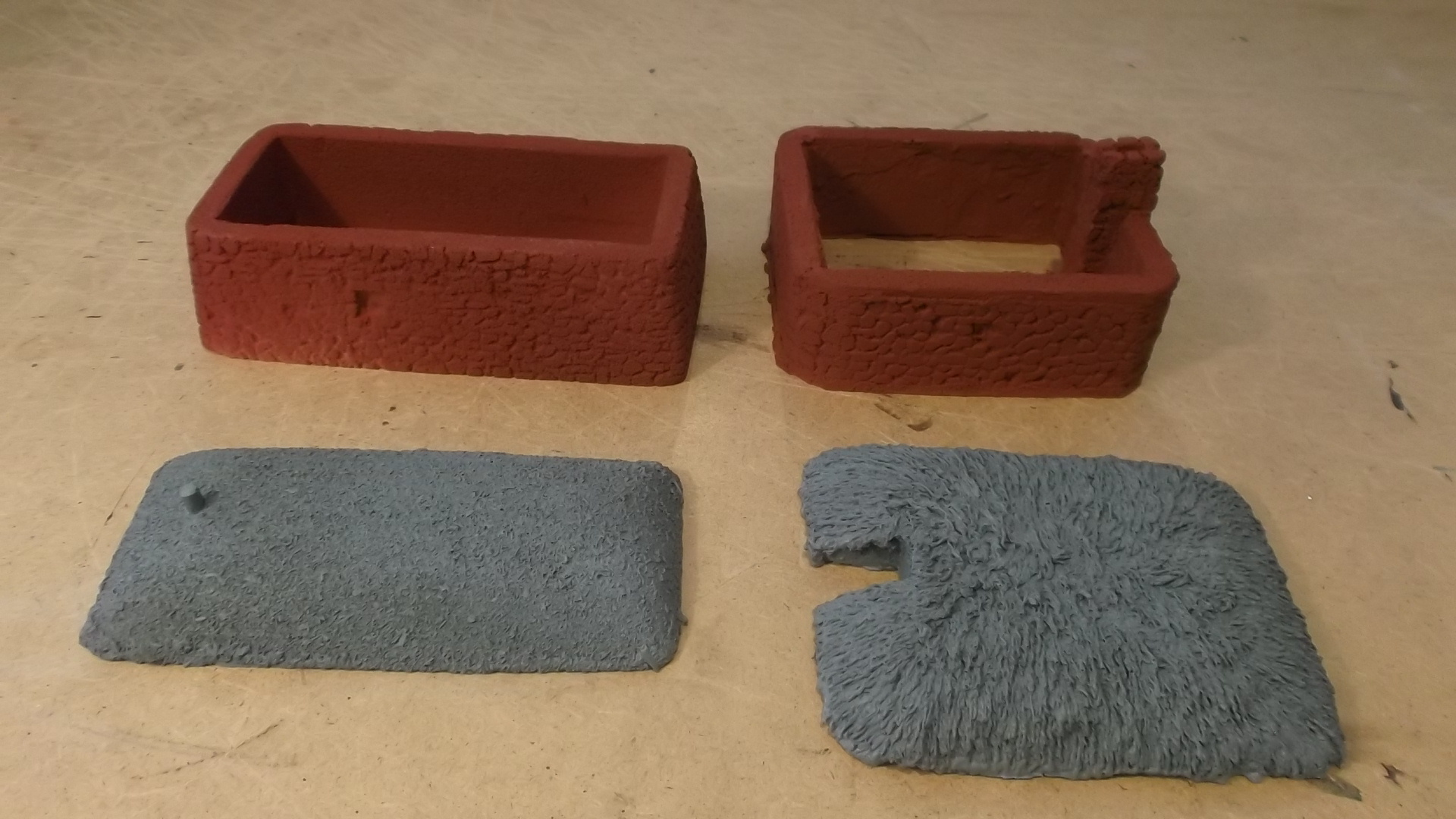 Interesting
"“Sir with the compliments of my officer, your shooting was excellent – you killed four of our men”!
Un-named Traillieur to an artillery officer at R`Fakah, Morocco, Feb. 29th, 1908
Top

Hope to have some snaps of progress tomorrow.
Meanwhile for those interested in the landscape of their games representing this area, I made some discoveries, through articles on internet.

This tells us about three traditional house styles in Ethiopia and seems to be true of Tigray province too.
The poor mans traditional house is a round house, with conical thatch roof, the Agudo house.
The better off farmers often have a rectangular, stone walled building - the hidmo house - (it has a framework of wood with stone infill that can be up to a metre thick, known as the monkey head construction system) with a timber and mud roof covered in stones and sometimes slates, and this is usually flat and sometimes accessed by an external stone staircase, but possibly ladder in less well off farms, and the roof can be used as an additional family space, or for storage, and it seems sometimes for smaller animals where there is a stone stiarcase. In some photos these can have dried grass or 'green' grass covering but this isn't thatch but nature taking advanatge of the roof materials and grass growing naturally, it appears. Interior walls have limestone white wash. Many photos have stone flat roof (no walls on rooftop) with ocassionally a haystack or other crop drying out on roof. The farm often has a walled enclosure, the dembe or courtyard, with outbuilding.
The third type seems to be the Chief or 'well off' family home and these are usually circular in plan too, with a conicla thatch roof.
Some of these buildings would be early examples of pitched tin roof where the farmer or official had wealth and access to market selling corrugated iron sheets!
The photos I found sometimes show all three types in one farm; as the farm has developed over time perhaps?
More modern wars have led to displacement of farmers and the building of temporary homes with stones in metal cages, and local bamboo used for roofing, with mixture of earth, plastic and grass covering the bamboo.

So my thatch roof on a long stone house seems inaccurate assessment of the initial photo I displayed! But heh ho, it will be fun to complete and merge the types!
CarlL
Top

Here is an example or two from freebie photos on internet to illustrate the above. (No copyright infringements I can see.)
CarlL 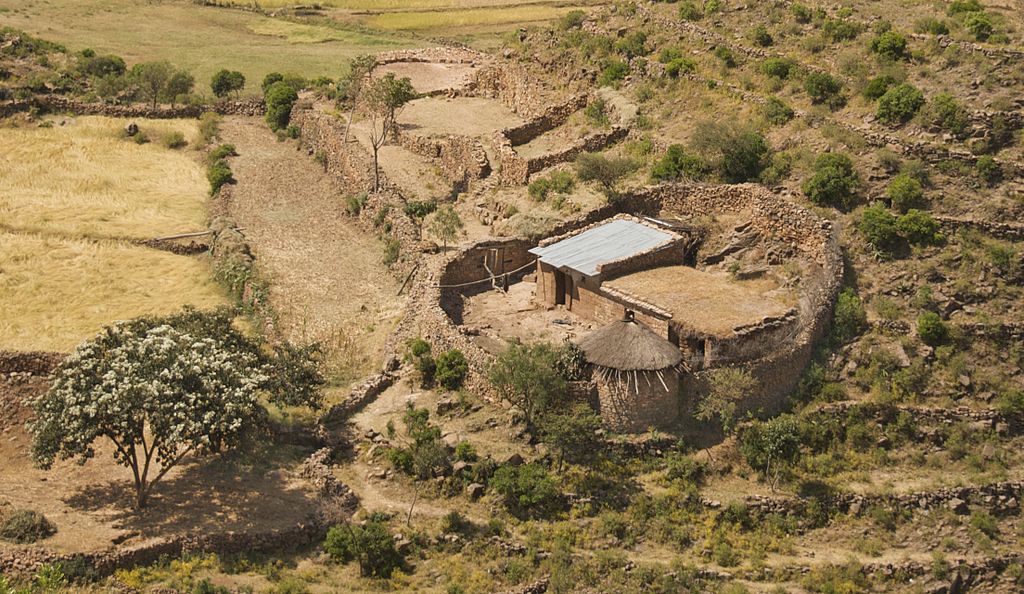 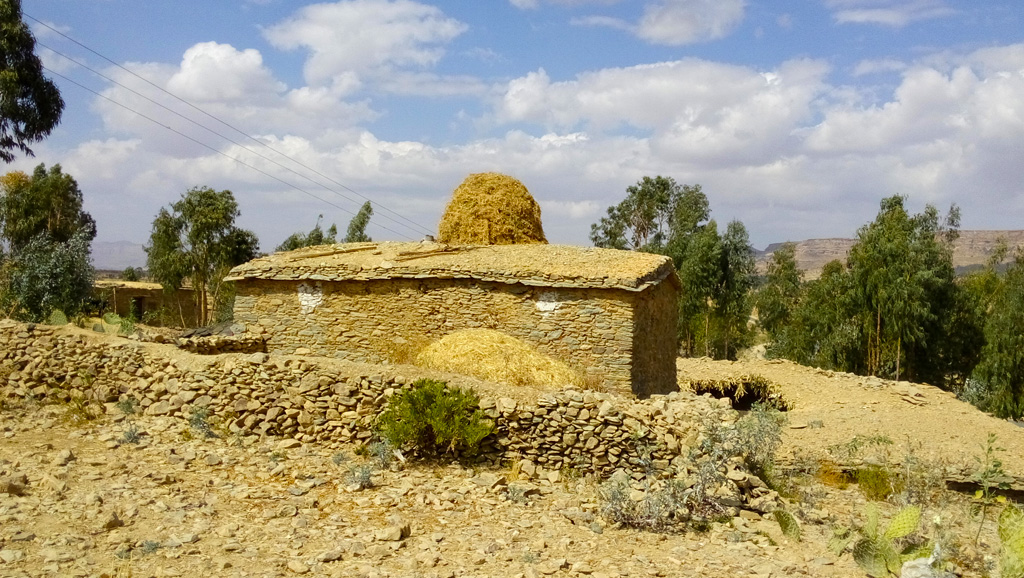 PS other aerial photos which I have viewed (and which are copyrighted) show the field systems with their stone boundary walls, which are eye catching. I had thought thorn bush or wood might be more common but stone is obviously the resource thats easiest to access in these mountainous areas.
CarlL
Top

Up date on my "conversion" by paint of two Anyscale model Scottish stone houses into two Tigrayan farm houses.
I used a smooth masonry paint over the base primer coat (see earlier photos) of sprayed grey acrylic primer. This brick red gave me the base colour close to the red of the original picture but on this occasion the smooth texture probably hindered the dry brush overlay to pick out the stonework as it gave a slight burr ot fuzz to the texture that came through the dry brushing. I tried to compensate by picking out some stones in other colours than the base red and then dry brush over in a variety of toned down reds / oranges/ pink colours. (Not the masonry paint red I hasten to add!)
Instead of a tin chimney on the longer model, I opted for a pottery one as I read that there is a tradition of using pottery chimneys.
Tempted to place them on a fixed board, (with added walls etc) portraying a farm like in the photos of real farms that I previously posted. But if so that will be for another day as I am trying to get models painted that have laid incomplete since purchase.
Proved hard to get a good roof effect of dry grass thatch and new sprouting grass, so may need to use flock to give it a bit more life.
CarlL 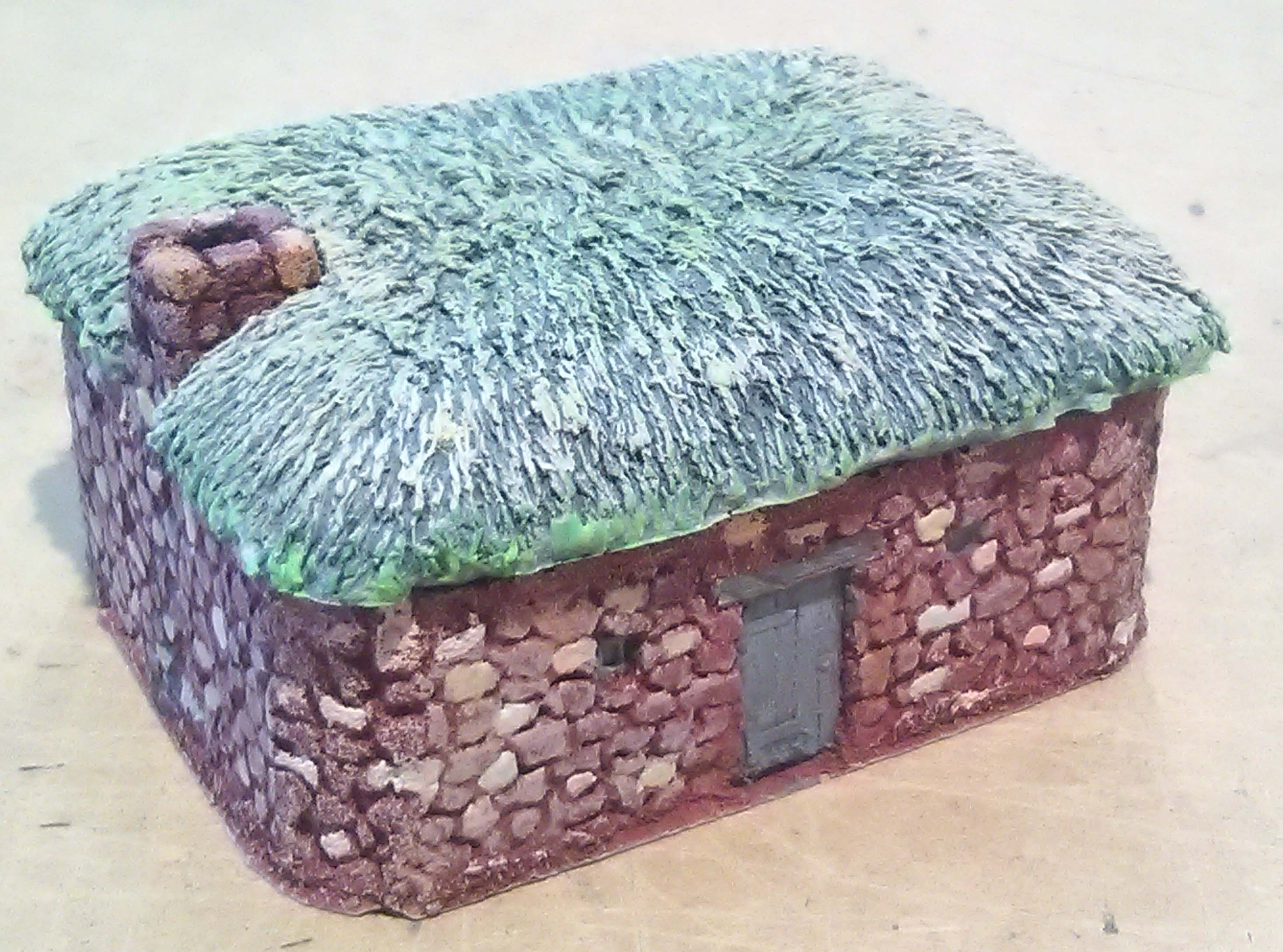 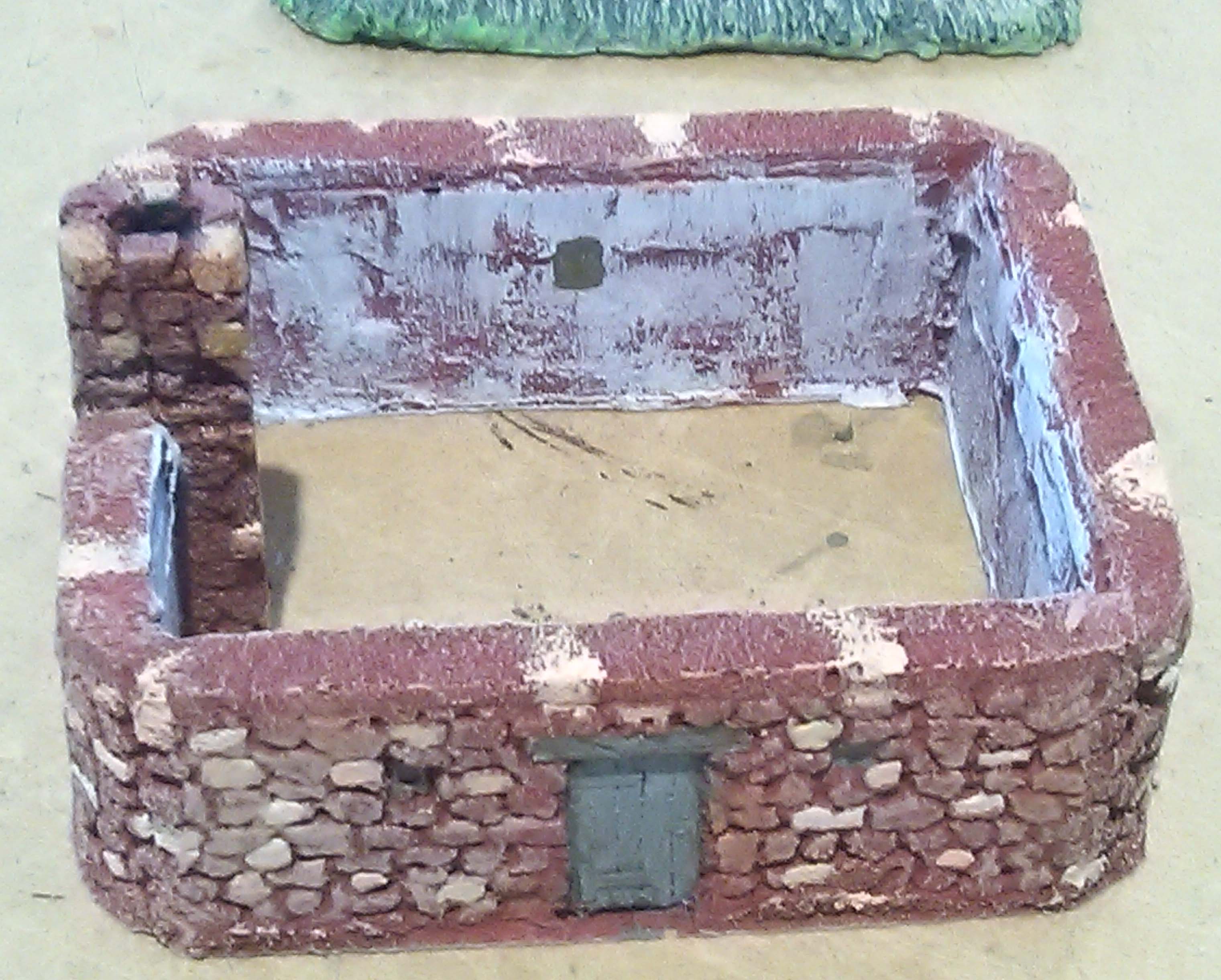 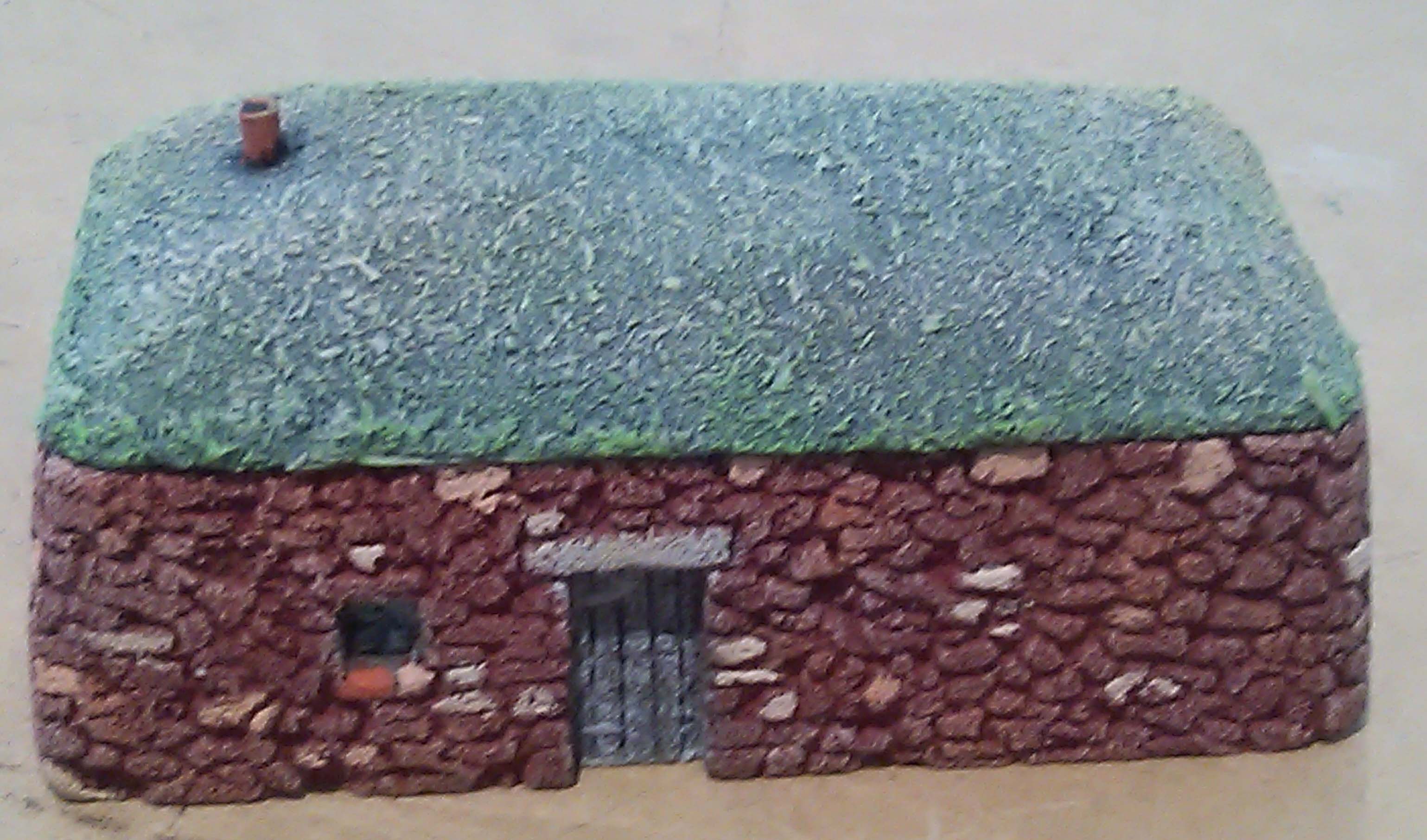 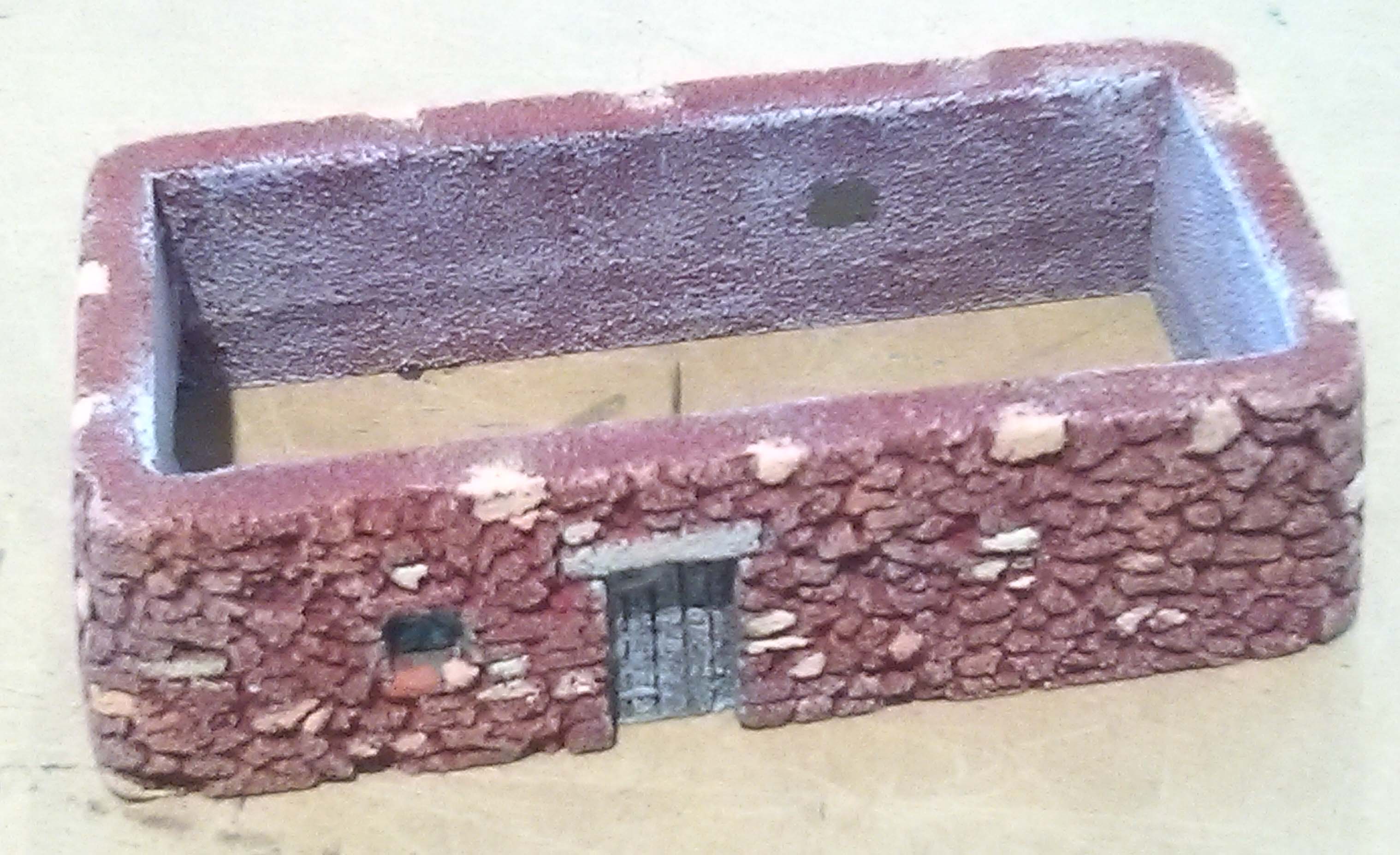 Carl, the next time you are off wandering about, (and not by yourself I may hasten to add

), if you can find a D.I.Y store, (or similar paint selling establishment), see if you can pick up one of those home tester pots of paint in a Terra Cotta colour. If you can, try to lighten it with some white, and maybe thin it down, (as I'm sure it will be too think to just paint straight onto your model), and try painting your buildings in this Terra Cotta mix. You can always dry brush over it some lighter or darker shades, to make it stand out a bit better.