This is a fictional tabletop game based on the actions of various elements of the French 2nd Armoured Division in its attempt to close the Falaise Pocket in Augsut 1944.

Groupement Mobile Alucard (a fictional element made up just for this game) is tasked to clear and seize the industrial area and rail yards south west of the town of Forges to secure this the right hand flank of the division to support further advances.

They face a motley collection of survivors from the German 728th Infantry Regiment battered and exhausted, but still capable of some sort of defence.
My table looking toward Forges

Looking from Forges towards the French advance

My kit bashed 40mm sp (a vehicle unique to 2Dble)

Turn 1
The French decide to make a three pronged advance, dividing their command along the road/rail line plus two cross country columns all mixed armour/infantry.
lt tanks leading on the right hand flank

recce down the road

Tank destroyers and infantry on the left

Gets through and the first salvo brackets the lead vehicles, wiping out the Jeep and heavily damaging the M20

One the left the infantry dismount and prepare to cross the road and attack the factory, supported by the M10s, a Sherman and the M4 HTMC, the engineer halftrack advances forward so its platoon can dismount and support this attack too.

The infantry on the right move across the road, immediately they come under LMG fire and take casualties.

On the right the infantry cross the road unopposed except for an odd sniper round, the farm is empty!

Command elements of the French arrive on tabletop

Turn 4
The artillery dual continues the Germans bracket the lead Shermans but fail to score hits or damage, the French hit and bring down the water tower, a huge stroke of bad luck for the Germans sees it fall on the 20mm Flak position wiping out the gun....
emplaced 20mm in the rail yard

On the right the German sniper scores his first kill!
Turn 5
The German artillery falls silent, the French assume they`ve got the FOO and the Shermans on the road move forward. They are immediately fired on by the Pak97/38 which hits but fails to penetrate, at this point my almost legendary curse of the anti tank gun kicks in and it is spotted and obliterated in return.....

But the Germans quickly got their revenge and a hidden panzerfaust claims the leading Sherman although the firer is instantly gunned down too.

On the left the infantry supported by engineers clear the factory building, but also engage other Germans among the bombed out biuldings
On the right the sniper claims his second victim, but is finally spotted and killed

Turn 6
Much to the surprise of the French and i`m sure to the Germans too, the Luftwaffe makes a rare appearance and performs a strafing run down the road. it hits but fails to cause any casualties in the command half track. The SP 40mm Bofors actually rolled a misfire and the two .50cals which also fired at the Me109 both failed to hit anything at all.......... 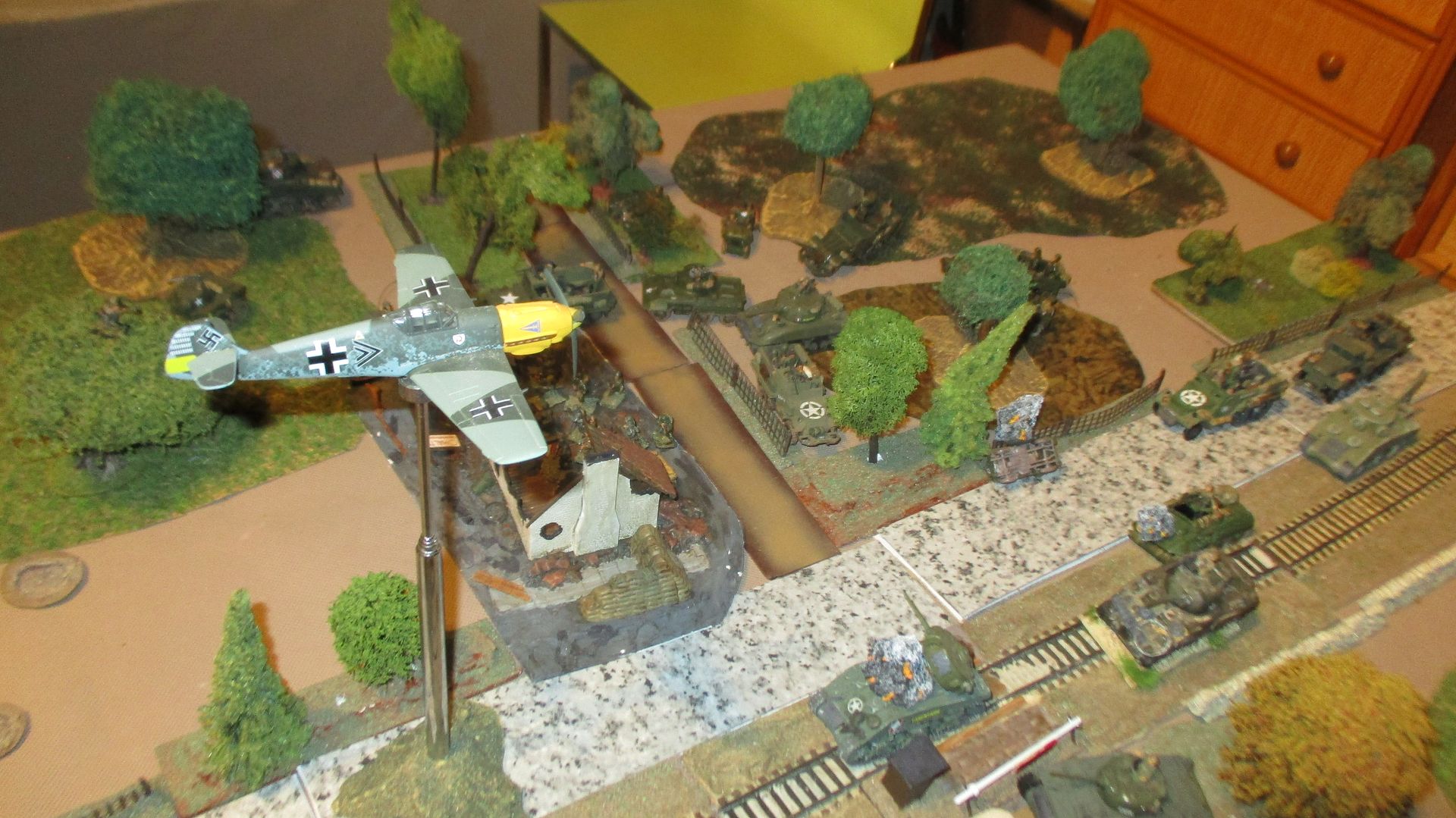 The Shermans in the centre want infantry support before risking anymore panzerfaust shots, so hold.
On the right the lt tanks, now joined by a Sherman and a couple of platoons of infantry begin to move forward toward the wrecked engine.
On the left an M10 and a Sherman break into the factory grounds to help clear the stubborn German defenders.

At this point I decided to call it a day, playing solo has created issues I hadn`t considered - obviously I`m moving all the pieces and rolling all the dice for both sides. Also as always with our games I`m taking notes and the photos. Trying to be "non omnipotent" and NOT pre-judge tactical moves, was more time consuming than I has previously guessed.

I will continue this later this week.
"“Sir with the compliments of my officer, your shooting was excellent – you killed four of our men”!
Un-named Traillieur to an artillery officer at R`Fakah, Morocco, Feb. 29th, 1908
Top

Richard,
Great table (and table extra) layout. Love all the "clutter" of a closed terrain. Interesting forces. Not many player use the Free French in this period of late WW2.
Its a dogged fight.
Lots of great terrain pieces. I especially liked the smoke and flame "markers" on your buildings like the factory. (If I have the correct building, there are so many!!)
Enjoyed the photos and 'foot' notes.
Hopefully the time element of playing solo, and taking photos and notes for a game report, will be less tiring now you are retired and you can choose when and how much time to give the game (before stopping for a break and leaving it till next time)?
As you say its a time consuming process playing both sides and making records for the third side - us readers - to enjoy. Thanks for doing so.
CarlL
Top
Post Reply
2 posts • Page 1 of 1