by dadlamassu
Sometimes air support is central to the game. In our games set in Iraq in 1941 almost all games involved air support 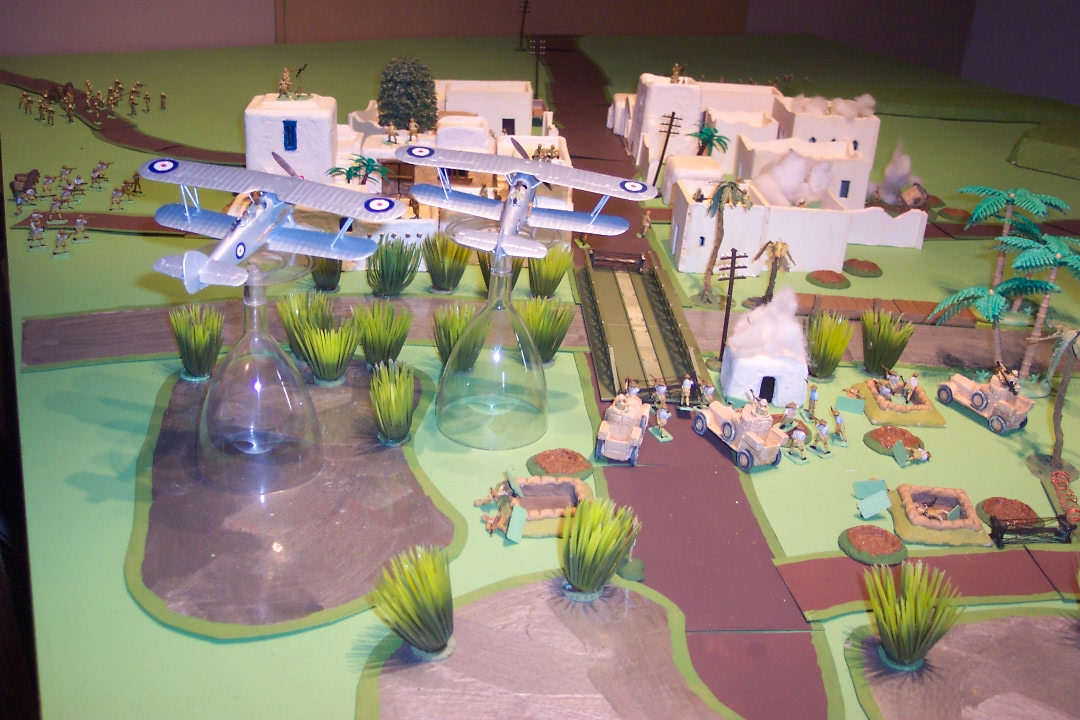 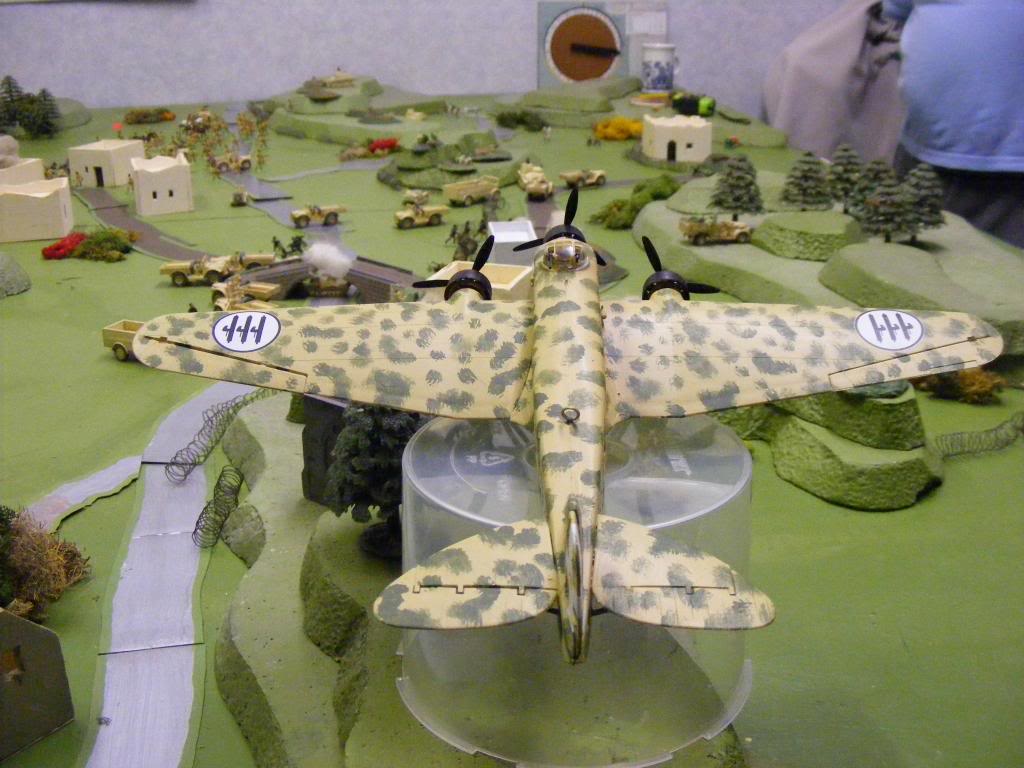 by UshCha
Seret, good point, but minelaying aircaft would be on the board for only a few minutes of actual time so proably not worth the painting effort. 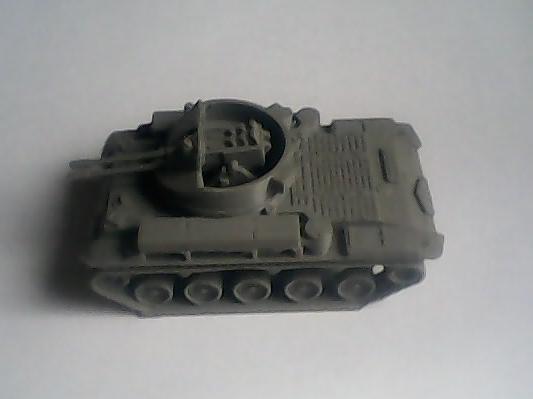 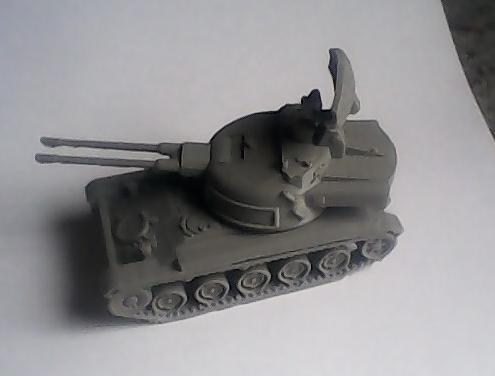 Tigercat SAM (Printed Planes) second coat of white need - somewhat fiddly since there's only two parts to the entire thing; the base and the rotating launcher with missiles on it, making it difficult to get cleanly into the nooks and crannies without overpainting the wrong bits. 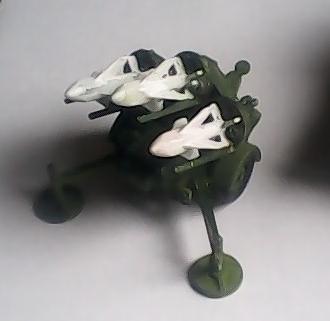 Of course the two tracked systems are also useful for chewing up infantry...

by bannockburn bhoy
Thanks for posting these. How much do they cost. Are the AA missiles difficult to extradite from the support sprues.
I see Printed Planes are over subscribed in terms of order turn around.. cheers John

by MrCreak
The Duster is £9.90, AMX £7.70 and the Tigercat £15 (but that price includes postage, Butlers charges £4 postage on all orders). Tigercat was pricey compared to the other stuff, but, what the heck it looks good.
Extracting Tigercat from the supports was easier than I thought it would be, and far easier than it looked like it was going to be. Both components are printed at 45 degrees from flat, so there's a "base" of junk that needs removing (I use sidecutters) and getting rid of that shows all the "uprights" for what they are meaning that you just have to snip them off where they join the main bodies. There's a couple of supports that run parallel to the missiles themselves and, with the whole thing being made of a "glowing white" material does tend to send your eyes funny trying to focus on what's missile and what's not - not helped by there being two "real" pieces under each missile.
But cutting off the junk and trimming took a grand total of about 10 minutes once I'd worked up the courage to get stuck in: it looked far more complex than it proved to be.
One thing I do like about Butlers is that you can buy the turrets separately[1], I bought a load of 20mm external mount turrets (from the M113 C&V variant) - one of which, with fettling, will be added to an AMX VTT to make the M56 variant VCI, some 20mm Vulcan turrets (from the M163 VADS M113) and a couple of the German LARS "turrets".
The only quibble I have about the Tigercat is that the "turret race" is made size-for-size. The hole in the upper part is exactly the same diameter as the "nub" on the "trail unit": given the toughness and density of the material (it's essentially heated and compressed as it's moulded) means that it's a real b*gger to get a good rotating fit. After two careful attempts at sanding down (there's not much to grasp sufficiently hard to give a proper go) I've decided to just sit the top onto the bottom and hope no one knocks the gaming table too hard).

1 I also negotiated a couple of separate hulls - that way I get to fit 2 AMX-13 hulls with the LARS MLRS "turret" to make rocket artillery support for my Latin American campaign.

Are your aircraft stands home made or bought in?
They look good with transparent bases.

Carl, sorry for the late response but only just saw your query. They are homemade, using 1/4" plexiglass sheet from the local home improvement store and cheap telescoping "rabbit ear" type TV antennae. I cut the plexiglass into hexagons using a jigsaw, and then filed the edges smooth. I removed the tips from the antennae and inserted a short length of 1/16" diameter wire, to fit into a small hole drilled in the belly of the aircraft model. The other end attaches to the plexiglass base using a small "U" shaped piece of sheet metal and a screw and wing nut, which allows the dive (or climb) angle of the aircraft on the flight stand to be adjusted if desired.

A bit of work to make them, but quite low cost and I am very happy with the results. Of course, it probably doesn't hurt that I am a former machinist and aircraft sheet metal mechanic, and am used to fabricating all manner of things from metal, plexiglass, fiberglass, etc.

by bannockburn bhoy
Aye David that would most certainly help

by CarlL
Thanks David. A photo of your climb and dive device would help us aspiring to such skills, if you don't object to be copied! As they do look good.
CarlL
PS copying your skills l doubt but your idea sounds clever if it's one that's OK to copy!?

CarlL wrote: ↑
07 Apr 2019, 08:33
Thanks David. A photo of your climb and dive device would help us aspiring to such skills, if you don't object to be copied! As they do look good.
CarlL
PS copying your skills l doubt but your idea sounds clever if it's one that's OK to copy!?

No objection at all to being copied. However, I don't have any suitable close-up photos on hand, and it may take me a bit to dig out one of the stands and photograph it. While it may sound clever, it really couldn't be much simpler. Some sort of swivel at the top end of the stand would be far more elegant, and I think there are several "store bought" flight stands out there that include such a gizmo.

David
All times are UTC
Page 2 of 2