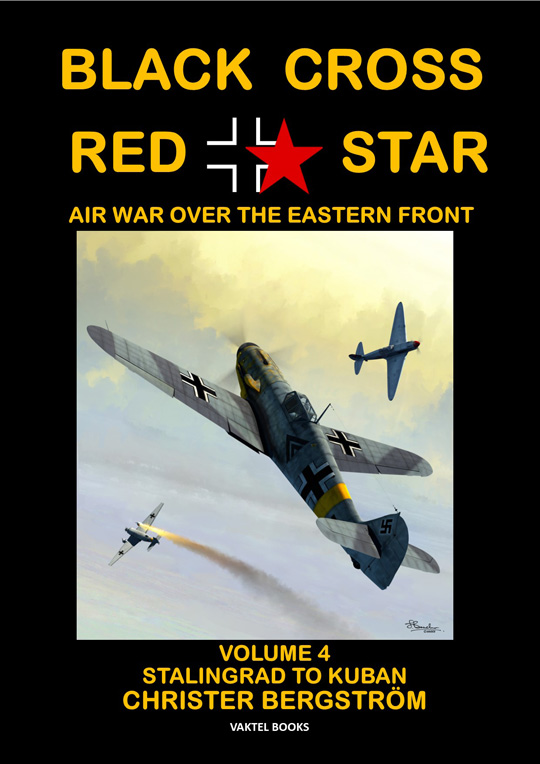 Volume 4 (Stalingrad to the Kuban) of the series is due to be published this year, and the publisher plans to follow this up with revised editions of Volumes 1-3, and then further volumes to bring the series to a conclusion.

Thanks for posting Phil.
Looks interesting.
And news to me too! How did it get to volume 4, without my reading about it till here! Perhaps as I am not an air power buff although air power was a major factor in the "drang nach Osten" by Germany.
CarlL
Top

The Ost front is my main war gaming outlet ,I think there is an under appreciation of this area of the war ,the air war in the east played a huge part in the conflict. The logistical problems it posed for the Luftwaffe were enormous ,especially when the tide turned.
The build up and development of the Russian Air Force was astonishing both technically and in its the volume, particularly if you look at its strength and capabilities at the outset of their war.
Thanks for posting Phil cheers John
Top

I think his intention was always to do an overview of the air war on the Eastern Front, but with the depth and breadth of operations to be covered it had to be a multi-volume work. Vol 1 and 2 were from the same publisher, there was a hiatus and change of publisher before vol 3 appeared and then the publishing effort seemed to move to specific campaigns - so the stand alone books on Barbarossa, Stalingrad, Kursk and Bagration came out (I seem to not have the Kursk one) and then there was the long pause till now....
Top

There has been a lack of 'the other side of the hill' viewpoints for a while with the Eastern Front air war, some German pilots rack up huge kill-counts but accounts of Soviet performance, at least till Bergstrom's books (to my mind) were blighted by the need to reflect a narrative of Soviet dogged perseverance whilst admitting to no errors or mis-steps.

Luftwaffe loss rates in the opening phase of Barbarossa were, I believe I've read (probably in vol 1 or the Barbarossa specific book),actually worse than in the Battle of Britain, and the commitment of instruction units to Stalingrad was catastrophic to the quality of replacement aircrew.

It takes nothing away from the performance of the VVS/ PVO to wonder how much harder their task would have been if the Luftwaffe had not been forced to redeploy units to the air defence of the Reich. I suspect Kursk was probably the last time the two air forces fought at rough parity in terms of the level of effort both were able to commit, by which time the VVS was beginning to implement the lessons it had been learning so painfully in the earlier stages of the war. The performance of the VVS and Luftwaffe during Bagration demonstrates the sea change in capabilities for the two sides very well.
Top

Book 4 has arrived earlier than anticipated... some quiet reading/ sceanario mining to follow, then potentially a review.
Top
Post Reply
7 posts • Page 1 of 1