by dadlamassu
In the Journal Rob quotes Max (von) Hastings figures abut the percentages for the "attrition" of Allied tanks due to Panzerfausts. Unfortunately Hastings does not give his source or the meaning of "attrition" in this context.

Regrettably Hastings uses percentages and not actual numbers this means that without the actual month by month totals we cannot be sure whether the actual numbers increased or decreased. If we assume that the other methods for example mines, AT guns, tanks, artillery, Panzerschreks, SP guns, aircraft etc were also active then their percentages must have reduced. This can, of course, be explained by the reduction in numbers, effectiveness and deployment of the others as they were destroyed, ammunition and fuel shortages etc.

In Normandy the Allied tanks suffered heavily from tank and Anti-Tank Guns. Since the Germans lost huge numbers of these the pursuit then it is logical that the loss rate to Panzerfausts would increase. So the percentage increase does not necessarily reflect "Effectiveness" but "Availability" as the table below shows for US Army losses. They were used in vast numbers to achieve this result. 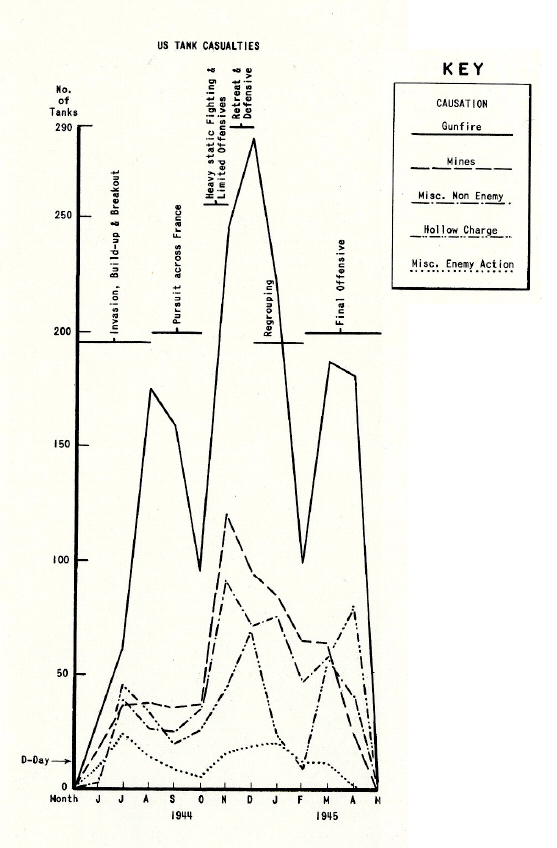 by Ian Shaw
I was going to post something similar. The percentage of losses due to fausten wold obviously increase given that most armour went east.

by dadlamassu
What is interesting in the table is that "non-enemy action" (breakdowns, accidents etc) account for more losses that Hollow Charge weapons until March 1945. As do mines, but how often do we see minefields and mechanical breakdowns on the wargames table?

by Seret
Depends on the game. Breakdowns should normally only be a factor of you're playing above the tactical level.

Minefields should be there in a tactical game though. TBH seeing how stuff like that is handled in a ruleset is one of my indicators of whether the author knows their stuff.

Seret wrote: ↑08 Jul 2018, 12:15 Depends on the game. Breakdowns should normally only be a factor of you're playing above the tactical level.

Minefields should be there in a tactical game though. TBH seeing how stuff like that is handled in a ruleset is one of my indicators of whether the author knows their stuff.

Breakdowns are a factor in the campaign rules; actually with retreats after battle rather than roll for arrival, which would make the defenders too variable. Heavy tanks are all lost while mediums take a percentage loss.

Minefields feature regularly if the defender has time to prepare the battlefield.

by UshCha
It's easy(ish) to model a Hollow charge weapons, but minefields need a lot of space generally. Ideally long depths so tanks can go a long way in before hitting a mine. At 4 mines per meter frontage you are almost guaranteed to hit a mine but ideally you want that in a km depth. That way you have to sweep a lot of ground just to get 4 mines per meter.

by Seret
Depth and density of a minefield is going to depend on what its purpose is. Minefields can do more than just block, often they're there to break up an enemy attack into little chunks, or to funnel it into a pre-planned kill zone. There's an interesting chart in one of the US field manuals:

So for a lot of minefields you'd be happy with with a 30-60% probability of encountering a mine, which translates to maybe 0.2 to 0.8 mines per metre.

A km would be an exceptionally deep minefield though. Most hand-laid fields would be 100-300m deep, plus a few scattered ones in front. From the same manual as above: