Looking for something else I found this photo of a Universal carrier with what looks like a .30 cal for the driver, a .50 cal fot the front gunner and a Bren on the AA mount. The "64" indicates a Machine Gun Battalion.

There are pictures of carriers with 20mm cannon as well.
Anything bigger than 6 is TOOOO big.
Top

The Carrier seems to have been tested and sometimes used with just about every infantry weapon! 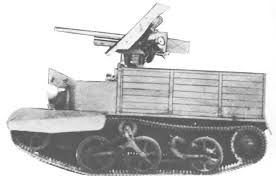 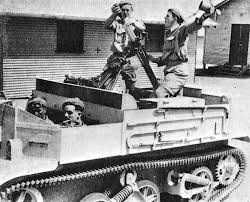 And also flamethrowers, machine guns, PIAT batteries, panzerschreks, Demolition charges and much more.(the Germans had a cable controlled version like the Goliath)

Normally yes, but in this case the vehicle is from 2nd NZ Div in Italy. Clues include the distinctive Kiwi combined divisional and unit number patch, the Italian houses and the typically 8th army relaxed attitude to uniform. The divisional sign isn't clear, but it'll be a silver fern.

I suspect it's not a 64, as that would equate to 2 NZ Mobile Laundry and Bath Unit! 2nd NZ Div used different numbering from normal, as it was actually structured as a mixed armoured and infantry division, a leftover from a mid-war experiment to create a sort of Allied panzergrenadier division. 2nd NZ liked being able to do both jobs and kept the organisation right through to the end of the war.

What you're probably seeing on that vehicle is an 84, for 21 battalion, part of 5 Infantry Brigade. It was normally infantry units that modified their carriers this heavily, the 50cal was a popular mod to give them a mobile heavy weapon of their own. Both 50cals and 30cals salvaged from dead Shermans were common. Actual Bren guns not so much, they preferred something belt fed.
Top

It could well be 84 - your eyes are much better than mine!

I did think it was in Italy. The .50cal and .30cal were often acquired by Motor battalion in armoured divisions from the armoured regiments not just from dead Shermans. but they would not be 64 or 84!

It certainly looks like a 64 which would make it a very heavily armed bath. No one is going to be knocking on the door demanding you hurry up with that much firepower at your disposal!

And as yet another example, how about my personal favourite, the 'Preying Mantis' version - which looks more like it should be 'Weird World War 2" but you can see an actual prototype at the Tank Museum as in this picture