To judge from the wiki entry this is a spoof.
If you are such a great writer make me want to logon and respond! [Adapted]
Top

After a bit of looking I found http://www.harhaus.de/hmneuheitenSCHELL.htm

This appears to confirm a single Army (!) hydrofoil capable of operating in sea state 5 in the Mediterranean/Baltic near Gdansk in late 1944. It was lost when its engines failed. Given the dates there is no possibility that it was for Seelowe but more likely for high speed resupply of the German garrisons on islands in the Med. But by the time it was nearing completion the need and capability was gone. The notes include details that to offload tanks/vehicles special pontoons were required confirming its logistic rather than assault roles. Yeah, it's hard to imagine what use a fast mover would have been on a short crossing like the English Channel. The round-trip time would most likely be dominated by the loading and unloading times at either end, not the transit time.

Operations in the Med, Adriatic or Baltic make more sense.

Looks like the tank was loaded onto a lighter, it's not clear if this was self-propelled and if it could unload onto a beach or if it required a dock and a crane. 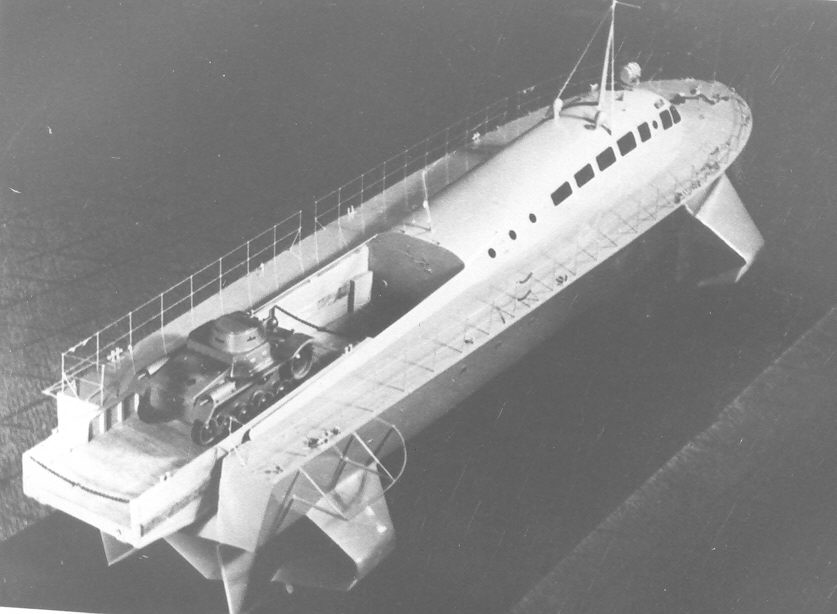 A decent general overview of wartime German hydrofoil projects and other experimental boats can be found here:

The lighter used with the VS-8 was self-propelled by 2 x 40hp motors.

Thanks for the additional info. I got it from Trojca’s book German Armour and Special Units of WWII, which mentions Sea Lion as the intended use, but the pictures of it in action are dated 1944. If you get the chance to look at it I would recommend the book. Lots of interesting bits about the improvised transport intended for Sea Lion and an operation that landed 2 Panzer II’s on Crete, by towing them over on a barge pulled by a tug. In order to land the Panzer II’s they had to blow the front off the barge after they beached it!

There is a little more info (and the same two photographs) in Peter Schenk's Invasion of England book.

Ordered by General Schiller of the Army Engineers for construction at the Saschenberg Yard in Rosslau, which already had hydrofoil experience in motorboats. Spec was for max payload 6 tons and speed of 80 km/h. The correspondence on the project was dated June 1940 so it is reasonable to think Schell had planned this type of craft for the landing in England. But Rear Admiral Fuchs, the Chief of the Main Bureau for Naval Shipbuilding, doubted the seaworthiness of the craft in open waters and development was halted. However the Navy took over the army contract and a test craft, the VS8 (ex Schell 1) was completed in 1943. Additional requirements were the capability to transport a 26 ton tank and the ability to land on an open coast using a special landing pontoon with an auxiliary engine. Test results were disappointing, however. The hydrofoil's design could not accommodate both a high-speed and a heavy load carrying capacity. Perhaps the project was engendered by the special conditions for landing in England: the relatively calm waters of the Channel at its narrowest point, and the inferiority of the German fleet at sea. Obviously, the idea was to use high-speed help to avoid a confrontation with the British fleet.

For anything regarding the German planning of Sealion and its naval vessels the Schenk book is invaluable. I just wish I'd bought more than one remaindered copy when I bought mine.
Top

Well a 6t payload precludes a Panzer II which was nearly 9t. Panzer I only, plus light vehicles. LeIG18 and Pak37 plus tows are another possibility, plus supplies of course.
It is a great looking boat and as something a bit left field would add a bit of interest to a Sea Lion game, which is also non historical.
Top

I doubt that any would have been available in time for Seelowe in 1940, It would take months (years?) from specification to in-service even in wartime. The solution is, I think, a typical German over-engineering solution to a problem. After all they could not built proper landing craft in time never mind a specialist vessel like this.

Mind you if I had a model one I'd certainly use it in any coastal game!

I have experience of the infamous "Vomit Comet" hydrofoil on the Stranraer Ireland run. OK on flat calm but very fatiguing (as a passenger) in anything else and it was a big vessel designed for the open sea. Even then it only sailed in the summer on good days.
Alan
www.morvalearth.co.uk
Top
Post Reply
12 posts