Over on TMP, see http://theminiaturespage.com/news/?id=132696962
you can find ad for their tenth volume of WW2 scenarios for PanzerKorps rules (but adaptable to other big scale battle rules) where the ad says:
"We have just released the tenth scenario book for our divisional-level WWII system, Panzer Korps 2.0. We try to focus each scenario book on either a certain aspect or theater of operations. The tenth book focuses on some of the larger battles and more challenging scenarios. Most of the action takes place in the Eastern Front, but we have a few on the Western Front, Italian Front, and Pacific Front. There are 16 ready-to-play scenarios with maps and force groups." and the scenarios covered are:
"A Savage Storm: Breakout at Mtzensk '41
Battle for the Uryv Bridgehead '42
Battle for Aprilia '44
Clash of Armor '44
Battle for Kecskemet '44
Battle of Dnov '41
Relief of Stalingrad '42
Bremoncourt '44
Siege Of Hong Kong '41
Kharkov '42
Nordic Fist '41
Battle of Le Cateau '40
Operation Grozny '42
Operation Zitadelle '43
Last Panzer Victory '45
Operation Epsom '44"
from where this image was borrowed. 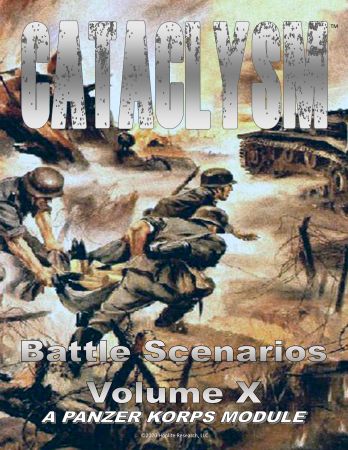 I have bought these rules and admired many of their simple but clever mechanisms, which often remind me of combination of board game campaign integrated with easy to play tactical rules for a top down regimental or divisional level WW2 game.
for more information see ad or see http://www.panzerkorps.com/

I would prefer scenario books to be period/theatre related myself, but hey ho
"“Sir with the compliments of my officer, your shooting was excellent – you killed four of our men”!
Un-named Traillieur to an artillery officer at R`Fakah, Morocco, Feb. 29th, 1908
Top
Post Reply
2 posts • Page 1 of 1