Well here is an article project I never got finished that has been printed in a new(?) Spanish print publication, but spotted over on TMP and OMM websites at
http://theminiaturespage.com/news/?id=1997443068
or http://onmilitarymatters.com/pages/dfindex.php

where the blurb says:
"Taxdirt 1909 The heroic cavalry charge in the Melilla campaign. Early in the afternoon of Monday, September 20, 1909, 65 Spanish riders threw themselves at about 1,500 Rifian troops. The surprise was absolute. More than a hundred of the bewildered Harquenos remained on the ground, and when the rest tried to regroup, the riders, led by the Lieutenant-Colonel Cavalcanti, charged again. After making a third and final charge and fulfilling his mission, the cavalry retired. [Spanish Text] $28.00 USD" 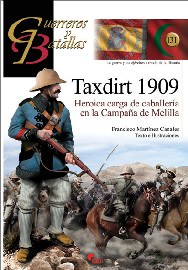 "Very big drawers"?? Cajones being drawers as in furniture not underwear!

My t'other half once asked for a sideboard/dresser with very big balls much to the delight of the store sales team.......

"Good health is merely the slowest possible rate at which one can die."
Top

I thought you would get the gist...

I have a couple of the publishers books, better than Osprey IMHO.

I wonder if this is the cavalry engagement Ashmeed Bartlett described in his book "The passing of the Shereefian empire", its about the right time period? My copy is already in Spain, will have to cross-check when I get back..........