For manufacturers to announce new model & figure releases. Members can post news of sales and bargains. No reviews.
Post Reply
5 posts • Page 1 of 1

Well these Newline 20mm figures aimed at 19th century Afghanistan and Mahdi troops in Sudan, could be useful for early 20th century North Africa, middle east, or the post WW1 troubles in the Islamic republics of former Tsarist Russia, or Iran and Iraq? 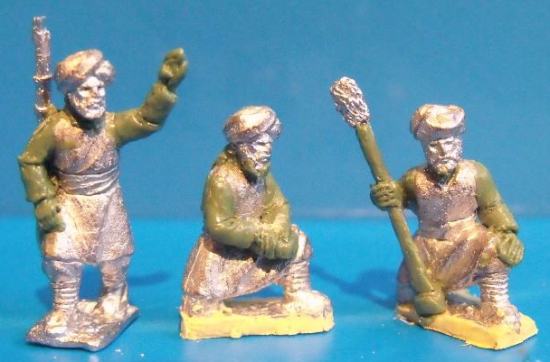 see Newlines own site at: https://newlinedesigns.co.uk/
for those who dont know Salute (wargames show) is being held on 6th April, at ExCeL One Western Gateway, Royal Victoria Dock
London E16 1XL
see http://www.salute.co.uk/salute/salute-2019/

C20th might be a stretch, unless you've still got some muzzle-loaded guns being fielded only about half of those will be any use to you.
Top

Seret wrote: ↑
01 Apr 2019, 09:11
C20th might be a stretch, unless you've still got some muzzle-loaded guns being fielded only about half of those will be any use to you.

The British 2.5" RML Mountain gun (also called & pounder) was used in WW1 and also in Somaliland in 1940. Maybe elsewhere too.
Alan
www.morvalearth.co.uk
Top

In any case many ww1 and 2 guns still used spikes and short rams, these could easily be trimmed down.

In Morocco the Spanish still some smooth bore brass cannon around WW1 and i wouldn`t be too surprised if the natives had some too.

Certainly in Mexico during the 1913-16 period (and before) smooth bore cannon using black powder (or at least the smokeless modern alternative) were still used. Home made dynamite guns were also employed - basically the explosion from a stick of dynamite was used to throw a projectile from the barrel