For manufacturers to announce new model & figure releases. Members can post news of sales and bargains. No reviews.
Post Reply
2 posts • Page 1 of 1

In my emails today, there was a advert from Models2U alerting shoppers to Italeri releasing 1/72, "World War II Diorama Set, Gustav Line 1944"
Their shop link is https://www.models2u.co.uk/contents/en- ... a-Set.html where pre-order price is being advertised as £85.49p (I assume excluding p&p but including VAT.)
The blurb read:
"Next in the line of Italeri's Battle Sets has been announced - this time covering the Battle of Monte Cassino.
The set includes a Laser-Cut MDF building - the Monte Cassino Abbey - plus German and Polish Infantry figures and Allied/German vehicles (awaiting final confirmation of these). T6198 - Battle of Monte Cassino Diorama Set - Scale 1:72 - £94.99 (RRP) It's currently due to hit the shelves in late-November, as ever, subject to change."
Photo below from same advert / blurb. I assume Italeri have something similar on their website but I haven't yet looked. 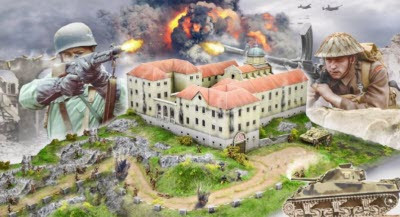 Not for me, but a good starter set I suppose.
"“Sir with the compliments of my officer, your shooting was excellent – you killed four of our men”!
Un-named Traillieur to an artillery officer at R`Fakah, Morocco, Feb. 29th, 1908
Top
Post Reply
2 posts • Page 1 of 1