What's on your workbench?

Discuss the society, wargaming, and other topics of interest
Post Reply
5 posts • Page 1 of 1

What's on your workbench? 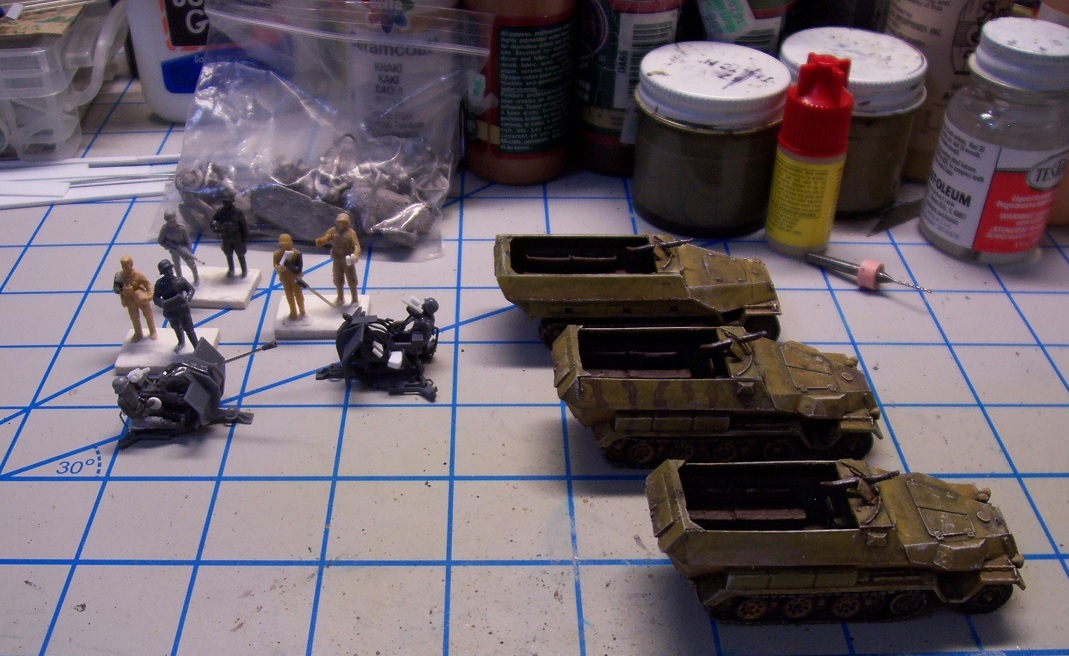 The halftracks needed little work other than repairing broken MG barrels (drilled and pinned with fine copper wire) and paint touch up on the wheels and running gear. Here they are awaiting decals, which I've yet to print. The Flak38 had a few missing parts and missing or broken gun barrels. The barrels were replaced with brass wire, with flash hiders made from stretched sprue, and replacements were scratchbuilt for the missing detail parts. I had to make up a seated gunner figure for one of them, a real Frankenstein creation using bits from various Hasegawa and ESCI hard plastic figures in the bits box. The same bits box also provided the parts to make up 4 of the standing crew and command figures shown here, along with the SMG figure from the Airfix German Recon Set and the other original Zvezda gunner. With a bit of paint the 6 figures and 2 guns will make up a complete Light Flak Battery for my early-to-mid-war Germans for Command Decision.

That is great going David, I`m glad to hear the mojo has recovered somewhat

Thank you for posting
"“Sir with the compliments of my officer, your shooting was excellent – you killed four of our men”!
Un-named Traillieur to an artillery officer at R`Fakah, Morocco, Feb. 29th, 1908
Top

You're on a roll!
Thanks for sharing the WIP pics.
Top

Sounds like a small army you have finished so far this year, David.

And I love that sawmill. Had me looking for parts to do similar for my Eastern Front games.....

Thanks guys! After a late night painting session the standing figures for the battery are now painted and ready to have bases flocked, and the guns are base coated with Humbrol 67 Tank Grey. Next will be a heavy dry brush with a lighter shade of grey and then detail painting.