Discuss the society, wargaming, and other topics of interest
Post Reply
22 posts

Miniatures in part. Next time we will move on to having troops on all the beaches using the figures from the club demo game used at conventions a couple of years ago. This time we used figures from FoW armies but they were a bit too large.

This was just the US beaches but we are not sure if in the autumn we will just do the BR beaches or have enough players to do all six; any SOTCW members interested? Probably first Sunday in October in Crawley. The plan is to mark the 75th Anniversary next June with the full six map play.
If you are such a great writer make me want to logon and respond! [Adapted]
Top

I was thinking that. They look good, but using 6mm or 10mm so that you can actually have more than one tank in a hex might be better?


any SOTCW members interested? Probably first Sunday in October in Crawley. The plan is to mark the 75th Anniversary next June with the full six map play.

Definitely. Keep us updated, I've penciled it in.
Top

Definitely. Keep us updated, I've penciled it in.

Yes, I think the demo size was 10mm and so is more appropriate.

Will do.
If you are such a great writer make me want to logon and respond! [Adapted]
Top

To mark the 75th Anniversary of 06 June, M44: D-Day Landings will be played at the Crawley Wargames Club on Sunday 09 June 2019. If you would like a place drop me a line or post here.

Final call; I think we can still get another one in and it would ensure we get all beaches played!
If you are such a great writer make me want to logon and respond! [Adapted]
Top

All the best with this, please post some photos for those of us who can never attend

Great photo. A huge hex game !
Wow takes me back to SPI and Avalon Hill and those games that took a weekend ot set up and a week to play .. slight exaggeration...
CarlL
Top

Great game today. The Germans had the lead until turn 12, at which point the Allies sneaked ahead and won on turn 15 78 against 72. With only ten players the two main backers had to play as German commanders on two beaches each. A very busy day; I got some photos at the start, the end of turn six and the end of the game. Better photos should appear soon on the club site: https://www.facebook.com/crawleywargamesclub/ .
If you are such a great writer make me want to logon and respond! [Adapted]
Top

I've been very slow to get these online, but here are a few snaps I took during the game.

I was given the US Airborne sector out west on the Cotentin Peninsular, supporting the adjacent landings at Utah. Due to the sheer length of the table I wasn't able to keep a close eye on how things were developing down on the British and Canadian beaches to the east, so someone who was down that way will have to chip in. 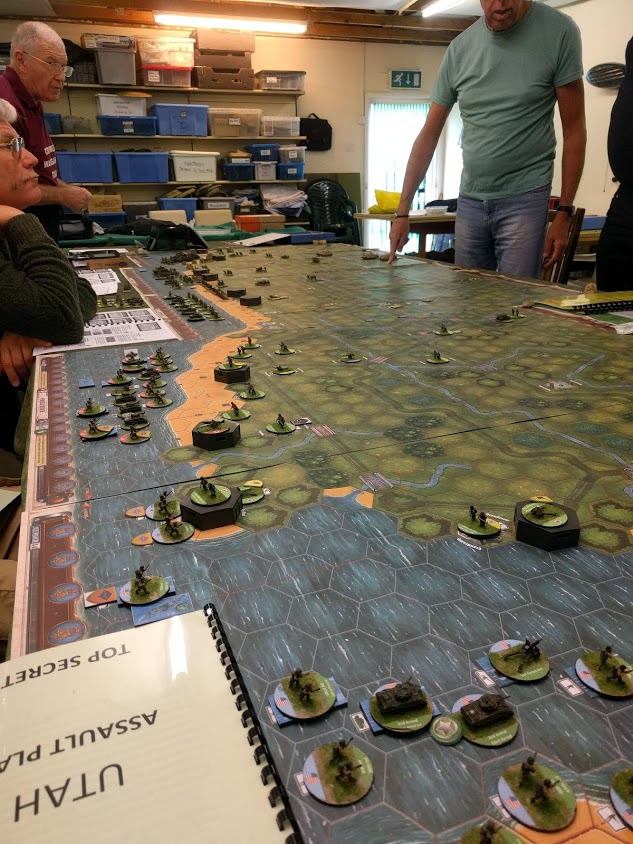 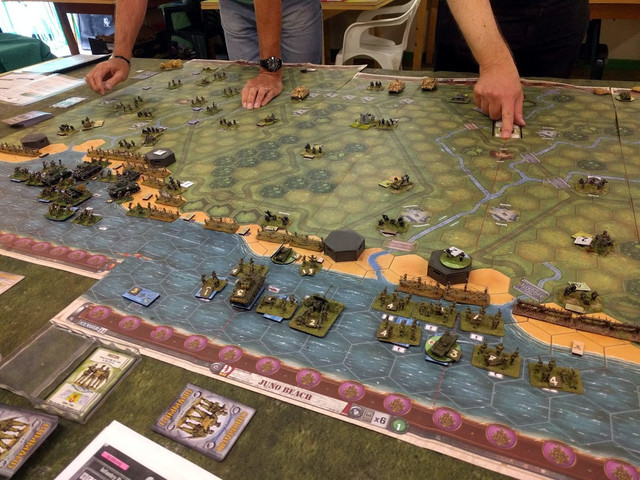 Allied forces begin hitting the beach along the Normandy coast. Figures were a mix of 10mm and 15mm, but with the sheer sizes of the table the mix of scales worked. Looking along it you couldn't really tell, although I think the 10mm armour worked better in the size of hexes. Unit strengths were tracked with tokens placed on the units. 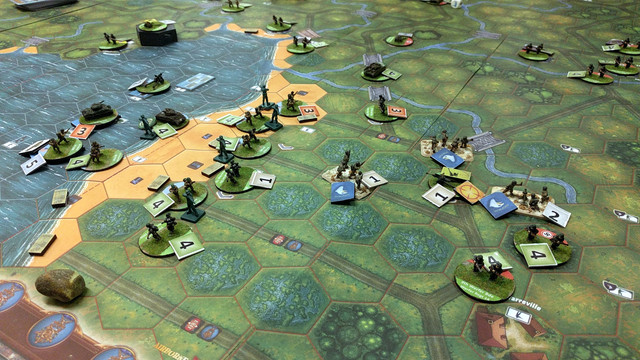 US forces landing at Utah initially took a beating from the German defences. Here they're clinging to their beachhead, but help is coming in the form of Airborne units (tan bases) who have launched a major attack on the German big guns firing on the beaches, which also distracted German reserves from moving down to the beach. On Omaha the Americans were having a tough time, but the paratroopers had managed to grab several important bridges and quickly captured St-Mere-Eglise and several other key towns, putting the scattered German defenders on the back foot. 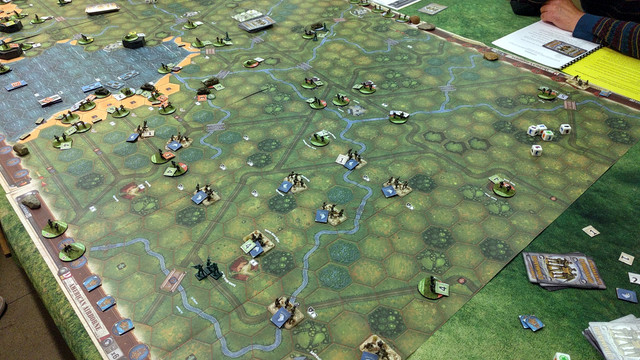 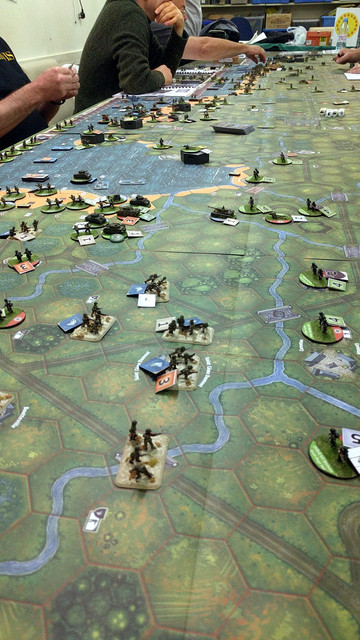 The troops on Utah got more organised and pushed ashore more confidently, but the Germans threw repeated counter-attacks into their left flank. US casualties were high, but the piecemeal German attacks were all broken up, including the loss of a small but key Tiger unit (before it could even attack, did it just break down perhaps?). With the beachhead stable the Airborne (spread out through the Cotentin) needed to concentrate and take the fight to the Germans. Luckily a few precious reinforcements dropped in and there was also help from the French Resistance, who were given some bridges to guard. The Germans still held the town of St-Come-du-Mont, and after a major battle the Airborne wrested control of the town and began to reinforce. The German fallschirmjager stayed put in Carentan and didn't pay much part in the battle, but some mechanised kampfgruppes did try to push the paratroopers off the bridges, with only temporary success.

By now the other beaches had done enough to reach the 78 medal victory point for the Allied side, but it was a close-run thing.

Thanks to all the lads from the Crawley club for putting on a well-organised and entertaining game!
Top
Post Reply
22 posts